It's not clear how cutting the 45p tax rate to 40p, as suggested by Lib Dem MP Jeremy Browne, would benefit Britain, writes Tony Dolphin. 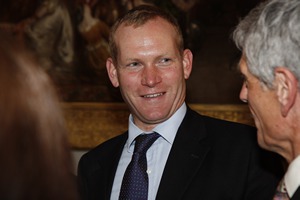 In an article in the Independent today – ahead of the publication of his new book, Race Plan – the former Lib Dem minister Jeremy Browne calls for the top rate of income tax on earnings over £150,000 to be cut from 45p to 40p, claiming this would help Britain win the “global race”.

There are a number of objections to this proposal.

First, the whole concept of a ‘global race’ is misleading. It suggests there have to be winners and losers among nations, or that Britain is striving to climb its way up some global growth equivalent of the Premier League table.

It is quite possible, with the right policies, for growth to be lifted across the globe. If Britain grows faster, it does not mean that somewhere else has to grow more slowly. If Britain increases its exports, it need not be at the expense of another country’s exports; it can be because world trade is increasing more rapidly.

All countries should strive for a level of output – and a growth rate – in line with their potential. They should also seek to maximise that potential. If a sporting analogy must be used, think not of a global race but of a person seeking to improve their personal fitness.

Second, there is no good evidence to support the idea that wealthy people will work harder if their tax rate is cut from 45p to 40p. Many people, even on such high incomes, have little choice over their terms and conditions of work. People in that small proportion of the population that earns over £150,000 are motivated by a range of factors to get up and work each day.

Third, the argument that cutting the top tax rate from 45p to 40p (or even from 50p to 45p as the coalition has already done) will lead to an increase in revenues because people will work harder or seek less actively to avoid tax is unproven. It is based, in part, on evidence from the 1980s when the top rate of tax was first cut to 40p – but our economy has changed a lot since then and the relevance of this evidence is questionable.

Meanwhile, the fact that revenues appear to have increased following the cut to 45p tells us very little. Because the cut was announced in advance, there was a huge incentive for high earners to defer their income. It will be several years before we know whether the cut has led to an increase in revenues.

Browne ends his article by saying “Britain needs a race plan”. It does not. It needs a plan for economic reform that will mop up the spare resources in the economy, nudge up its potential growth rate (be suspicious of any plan that promises a dramatic improvement), deliver better balanced growth and ensure that increases in prosperity are shared more equally than has been the case for most of the last 35 years.

It’s not clear why cutting the 45p tax rate to 40p need be part of that plan.