New figures from Shelter demonstrate just how precarious the economic recovery still is for many people. 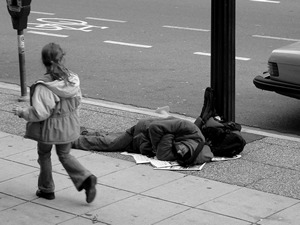 New figures from Shelter demonstrate just how precarious the economic recovery still is for many people, with 3.8 million families ‘one paycheque away from losing their home’, according to the homelessness charity’s new report.

A massive third of families now say they would be unable to make their next rent or mortgage payment if they were to lose their job this month.

What this shows is that, despite coalition rhetoric, there is still a long way to go before people feel like the economic recovery is benefitting them. Not only that, but it is a reminder of just how long it took George Osborne to turn the economy around (the intervening period can’t simply be wiped from the record).

Indeed, what’s increasingly forgotten is that many people are still paying for the three years in which the chancellor struggled to bring growth back into the British economy. 15 million working age adults in the UK have no savings at all, according to Shelter’s report; and presumably some of these people spent their savings trying to bridge the gap between falling earnings and inflation during the period when the economy was flatlining.

What’s so telling about some of the examples of hardship provided by Shelter is that they completely discredit the idea that those falling behind are ‘shirkers’ as opposed to ‘strivers’. As Liz Clare, a Shelter helpline advisor puts it, millions of us people find themselves living on a “financial knife-edge” through no fault of their own. “Every day we see how just one piece of bad luck, like a sudden job loss or illness, could put the family home at risk,” Clare adds.

One example cited by Shelter is a lady called Kate Murray: Kate said:

“They hadn’t been paying me properly, so I’d begun to fall behind on my mortgage. Then I got the letter through the door saying they wanted to take my house back. I was petrified. I thought what am I going to do? How am I going to tell my daughter and my mum that we have to move out?”

So what has the government been doing to reassure the new ‘precariat’? Only chipping away at the welfare safety net that might otherwise have acted as reassurance for those families one paycheque away from the streets. The coalition has targeted the social security budget with unprecedented cuts totalling £22 billion a year by 2014-15, with very little end to the austerity in sight according to the chancellor.

While wages have been stagnating, one thing which has been rising, however, is the cost of housing, for both renters and those looking to buy. House prices in London are up a whopping 11.6 per cent from just a year ago, with the average price (which currently stands at £458,000) expected to hit £600,000 by 2018.

The outlook is just as bleak for renters, with private rents in London double those in the rest of the UK.

It’s easy to blame foreign buyers for this predicament (and the public do), but the government is culpable because of its unwillingness to build enough new homes (one of Labour’s best pledges is the promise to build 200,000 new homes a year).

The Tories talk a lot about the so-called global race, but they would do well to recognise that people want economic security just as much as they want ‘dynamism’ and ‘striving’. The disappearance of many people’s savings during the downturn, coupled with the seemingly unstoppable rise in insecure employment and spiralling rents, ensure that there is some way to go before this can be called a genuine recovery.

5 Responses to “Coalition Britain: a third of families living on the cusp of homelessness”