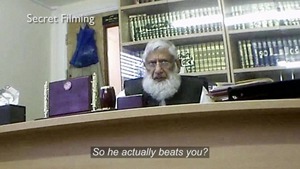 A religious or theocratic legal system, on the other hand, does not recognise such limitations – its notion of justice rests instead on the supremacy of its own revealed truths and the whims of the – invariably male – clerical authorities who interpret them.

The Islamic Sharia Council based in Leyton, East London, is the largest Sharia body in the UK. Sheikh Haitham al-Haddad is a board member and its representative.

Amongst other things, he has stated that “a man should not be questioned why he has hit his wife, because this is something between them”.

He has argued that there is a “proper” way of performing female genital mutilation, stating: “it is consensus of all scholars that female circumcision is sunnah [proper]”.

He endorses child marriage and has said that in Islam there is no minimum age for marriage. Rather, the marriage of children should be at their parents’ discretion (although he qualified this by advising “the earlier, the better, especially for girls. But you have to be careful of the legal, yaani [you know], issues”.

He has also recommended that children be married off during their GCSE’s (aged 15-16).

This is a man who presides over family cases.

It is little surprise, then, that women face unfair treatment before Sharia Councils. Last year this was highlighted by a BBC Panorama investigation entitled ‘The Secrets of Britain’s Sharia Councils’.

Most of the cases over which Sharia Councils preside are marital disputes and divorce requests, 9 out of 10 of which are brought by women.

It is important to ask: If Sharia Councils discriminate against women, why, then, do women seek their services?

The answer is that many Muslim women do not have a choice. Only 1 in 10 of the UK’s mosques are registered to conduct civil ceremonies under the 1949 Marriage Act. It is believed that a high percentage of Muslim marriages, if not the majority, are therefore not registered under the Marriage Act.

This can have grave consequences for Muslim women if their marriage breaks down. Under British law, unregistered wives are merely co-habitants, and therefore, they are entitled to limited property rights. The only possible route for them to seek some sort of justice is by turning to Sharia Councils.

But even if the marriage has been legally registered and a civil divorce is obtained, it is impossible for women to move on without also obtaining a religious divorce. Frequently, in the eyes of their families, their communities, and the laws in their countries of origin, they remain married unless they have been granted a religious divorce.

So Sharia Councils have become an unavoidable path for Muslim women in instances where their husband refuses to grant them an Islamic divorce.

This situation, in which a woman is kept in a religious marriage against her wishes, is known as ‘Marital Captivity’. This problem is not unique to Muslims; Jewish, Catholic and Hindu women often find themselves caught in a similar bind.

As a result, women are trapped in a state of limbo, forced to endure unhappy or abusive marriages indefinitely at the whim of religious authority. They are unable to rebuild their lives, to remarry or even to start a new relationship. If they do, they are likely to be ostracised by their families and shunned by their communities.

In addition, women from South Asian and Middle-Eastern backgrounds face the prospect of so-called ‘honour’ violence, and Muslim women can be arrested and prosecuted for adultery if they hold dual citizenship and visit their country of origin.

Needless to say, women in this situation are vulnerable to extortion and exploitation by their husbands.

It has been argued – by imams and multiculturalists, alike – that Sharia Councils can help to release Muslim women from marital captivity, by offering them a religiously sanctioned path out of an unhappy marriage.

This argument simply does not accord with reality. As Sheikh Abu Sayeed has stated:

“We don’t break the marriage. As long as marriage is sacred, our job is to reconcile the marriage”.

In other words, Sharia Councils have an agenda — to frustrate divorce proceedings and, wherever possible, to pressure women into reconciliation in order to “save” the marriage.

Petitioners, usually women, have little choice but to enter into this rigged process under the guidance of mediators who are not neutral.

Muslim men have exploited this bias in order to negotiate favourable financial and custody settlements, by ignoring the due process required by British law. And Muslim women have little choice but to accept unfair settlements simply to obtain a religious certificate formalising their divorce.

The One Law for All campaign is calling for an end to Sharia Councils and all religious tribunals in the UK, arguing that they work against equality and human rights.

Muslim women would be forced to turn instead to individual imams to rule on matters of marriage and divorce. It is highly unlikely that the treatment they would receive under such an arrangement would be any more egalitarian than that provided by Sharia Councils.

So what is solution to Marital Captivity?

Firstly, many of the problems and abuses Muslim women face in Britain could easily be avoided if all Muslim marriages were registered in the first place and thus recognised under British law. A much more rigorous approach to marriage registration is therefore urgently needed.

According to Section 75 of the Marriage Act, it is illegal to perform unregistered ceremonies. In theory, imams who do so could — and should — face up to 5 years imprisonment. But this is a crime to which the State turns a blind eye.

If all Muslim marriages were legally registered then Section 10A of the Divorce (Religious Marriages) Act 2002 could be extended to cover Islamic Marriages. This provision is used to help Jewish wives facing similar problems when seeking religious divorce.

Secondly, Britain should follow the Dutch example and provide women with a secular alternative to end Marital Captivity through the civil courts.

After years of Marital Captivity, she finally turned to the Dutch civil courts, which ruled that her predicament constituted a ‘tort’ – that is, an unlawful act incurring injury. Consequently, the judge imposed financial penalties on her husband for every day he refused to provide Musa with a religious divorce. He did so immediately.

Femmes for Freedom are excellent example of how feminist activism can make a real difference and how the secular legal system can be used to uphold the rights of minority women forced to conform to fiercely patriarchal religious laws.

In conclusion — we do have ways of tackling Marital Captivity and other issues affecting minority women. However, the biggest obstacle we face in pursuing these solutions is a pervasive political climate of cultural relativism.