Crying foul because of the identity of the messenger should not undermine the importance of his message, writes Jonathan Russell. 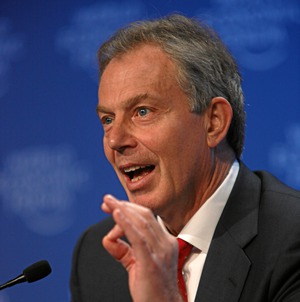 Crying foul because of the identity of the messenger should not undermine the importance of his message, writes Jonathan Russell

Tony Blair’s Bloomberg speech yesterday on the Middle East has been roundly criticised from various commentators, most of whom seemed to have not read or heard the actual speech. Brand Blair is considered toxic because of his legacy in Iraq, but the danger is that his valid arguments about Islamist extremism are lost.

Blair is correct in his assessment that an extremist and politicised distortion of Islam is one the greatest threats that we face in the 21st century. He is also correct to identify the myriad countries that this challenge directly affects, and explain that although we must not conflate Al Qaeda, Hezbollah and the Muslim Brotherhood, the commonalities between Islamist groups, such as ideologies and narratives, can be tackled with clear and consistent counter-messaging.

He clearly says that there is a “unifying factor based on a particular world view of religion and its place in politics and society”, and it is this narrow Islamist worldview that can be challenged. Religion is not a threat; shutting down pluralism is.

Likewise, Blair’s points about the British approach to the problem of Islamist extremism are very well made. Widespread weariness following military engagement in Afghanistan and Iraq should not negate the important need for our engagement in the complex debate of ideas in the post-Arab Spring rise of Islamism in the Middle East. Previous attempts to counter extremism have co-opted certain strands of Islamism or have failed to criticise extremists for fear of being called racist or Islamophobic – these strategies also fail to distinguish between religious thought and political exploitation.

The response to Blair’s comments also risk falling into another trap. Since there is little political capital to be gained by any major party in supporting Blair’s analysis, counter-extremism risks becoming a political football. Instead it must be seen as an essential and effective counter-terrorism tool for all. Similarly, the success of counter-extremism efforts is often unquantifiable and risks being endlessly debated by academics, but this should not be an excuse for inaction.

British strategic interests are certainly at stake and failure to protect the desire of populations all over the world for universal freedoms could have disastrous consequences, as Islamist rule certainly wouldn’t provide these.

Indeed, failure to contest the ungoverned space of Islamist narratives will undoubtedly spark a rise in anti-Western rhetoric and promote a narrow worldview that, when violent, will also threaten British national security. Government spending on countering extremism is better value for money that spending on security, defence and counter-terrorism, as it invests in tackling causes of terrorism rather than its symptoms, and, though often unquantifiable, will have longer-lasting and sustainable consequences.

When it comes to foreign policy, we may well take issue with Blair’s recommendation to engage with President Assad of Syria in order to drive forward negotiations and overcome the current impasse; indeed, we may find the idea of co-opting the Egyptian leader Sisi as abhorrent, given his absolute disregard for due democratic process.

However, these are not new ideas.

Their promotion by Blair comes in the framework of identifying that religious extremism is a more substantial and less controllable threat to the UK, and even more so for the inhabitants of the wider Middle East region. Any foreign policy concerning these countries and others will create grievances that extremists will seek to exploit through their narratives.

There is no perfect solution to these complex problems, but governmental clarity and transparency about its actions will go some way to countering these narratives, and addressing grievances through dialogue and other non-violent methods will undermine the efforts of extremist groups to do so through less savoury means.

I certainly don’t want to whitewash the failings in Iraq, nor say that his solutions to Middle Eastern problems are infallible, but Blair is correct to think long-term about the Middle East and has identified an important issue that we must all take note of. Even the most committed critic of Blair and his foreign policy would be incredibly naive to consider Islamist extremism as anything other than a defining issue for our time.

Crying foul because of the identity of the messenger should not undermine the importance of his message. Indeed, through the good work of the Tony Blair Faith Foundation, he is well-positioned to provide practical solutions at a grassroots level, engage in the marketplace of ideas, and deliver serious policy advice to governments.

9 Responses to “Brand Blair may be considered toxic, but some of his arguments are valid”