Baroness Warsi and sections of the media are trying to silence secularism in the name of a religious agenda. 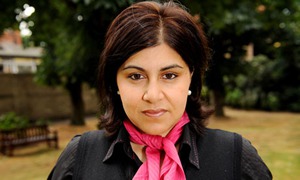 This is just the most recent of attacks on what has been described as ‘militant secularists’ and ‘secularist propaganda’ in the media, levelled at campaigners concerned with the relationship between religious organisation and the state.

Yet although Warsi so readily treats secularism as an insult, she fails to explain what exactly makes it so radical.

Dawkins perhaps was an easy target; he seems to have suffered a decline in support over the past few years, including condemnation from previous supporters within the atheist community. It has become fashionable for journalists to criticise his lack of ‘relevance’ and maturity, his ‘crudity’, and it was gleefully reported when he’d dropped out of a Prospect magazine list of the world’s best thinkers last month.

Writing about the decision, the editor of Prospect magazine commented that “it’s hard to imagine that many people have been actually persuaded out of their faith by [Dawkins’] anti-religious writings”.

These criticisms, targeted at atheists and secularists almost indiscriminately, represent a grave misunderstanding. Contrary to popular misconception, secularism and atheism are separate entities, each able to exist without the other.

Baroness Warsi, alongside much of the right-wing press, seems to have misunderstood this.

Dawkins himself isn’t an atheist (he’s agnostic), and his work goes far beyond trying to convince people that their religious convictions are wrong. Rather, he highlights the injustice in society caused by the special treatment that particular religious views are granted, and the prejudice that non-believers are faced with.

Secularism isn’t a radical movement trying to destroy all religion, it only aims to stop state preference for a single religion, in order to grant all beliefs equality under the law. Similarly, it aims to protect religious organisations from state interference.

Only last Saturday were we reminded of the importance of secularism, when presented with the UK’s first ever same-sex marriages, the result of 22 years of campaigning and an issue that continues to divide opinion. Whilst the LGBTQ community and its allies celebrated, many religious figures were left concerned that the move had ‘redefined’ the ‘religious institution’ of marriage.

Of course, had a secularist policy existed in the UK, the state would never have adopted a religious definition of a union between spouses, and the Church wouldn’t have had to worry about their intervention in law-making being redefined. It seems ironic then, that Baroness Warsi is eager to criticise secularism, which defends the autonomy of both the state and religious organisations, whilst also raising concerns about the Equal Marriage bill.

It seems clear that Warsi, like many others, opposes secularism in an attempt to maintain their religious agenda in government, an act that is clearly undemocratic. In contrast, secularism is rooted in democracy and equality, principles that are cherished by the UK public, but happily compromised when it comes to religious issues.

The consequences of tying religion with the state are clear; in a 2011 poll, only 29 per cent of the British public declared themselves as religious, yet 26 unelected (male) bishops sit in the House of Lords. These unelected bishops are free to preside over law-making as they wish, enforcing their exclusively religious agenda onto new legislation.

Education also suffers from religious prejudices; in faith schools, religious groups benefit from discrimination in admissions policies for students based on their parents’ religion. These schools constitute one third of all state schools, receiving vast state funding, yet children as young as four years old are routinely denied places because of their parents’ church going habits. Most importantly, the majority of the UK public believe state schools should be secular, yet there is no government policy to represent these views.

Healthcare spending is also dominated by a religious lobby; the NHS, currently facing a funding crisis, spends £29 million each year on chaplaincies to pursue a religious agenda in hospitals. Secularists question this, and suggest that the money should instead be spent on medical treatment with proven clinical benefit.

Likewise, animal rights are infringed because of the special treatment religious belief is given; whilst fox-hunting and cosmetic testing on animals is banned, the brutal and painful killing of animals for Kosher and Halal meat is routine in slaughterhouses across the UK. Although condemned by advisory bodies to both the UK government and the EU, the method still continues.

Secularists challenge this extraordinary influence that religious groups have in influencing government policy.

And secularism doesn’t only benefit atheists and agnostics. The movement has support from a number of religious figures; Giles Fraser, a Church of England priest, has spoken of how “society is too diverse to sustain a state religion”. Gandhi too, showed support for the movement, once describing an ideal society:

“The state would look after your secular welfare, health, communications, foreign relations, currency and so on, but not your or my religion. That is everybody’s personal concern.”

So, why then, is secularism so readily scorned?

The movement aims to protect freedom of religion, alongside democracy and equality; beliefs that are all widely supported among the public. Yet when Baroness Warsi and the right-wing media use the term “fundamentalist secularist”, they use it as a stand-alone jibe.

Personally, I’m proud to say that I’m a secular fundamentalist. In the same way I’m proud to be a fundamentalist on civil rights, universal suffrage and the campaign against homophobia. According to the Oxford English dictionary, “fundamentalism” is defined as “the strict adherence to the basic principles of any subject or discipline”.

When did it become a bad thing to hold some basic principles and adhere to them; when did “fundamentalism” become a dirty word?

Those who claim Dawkins will not succeed in eradicating religious belief in society are probably right. But fortunately, that isn’t what most atheists want. It certainly isn’t what secularism aims to do. Baroness Warsi and sections of the media are pretending otherwise in order to silence secularism and pursue a religious agenda.

We cannot allow this to happen; a debate is needed on why a small religious elite are granted such preference and disproportional influence in our society.