Before we talk about social grade or class and the immigration debate, we must talk about age. 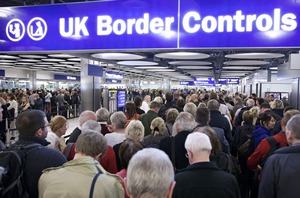 It is a political truth universally acknowledged that the issue of immigration in divides Britain primarily along class lines.

Pundits and politicians from David Goodhart to Nigel Farage will tell you the same story.

While the metropolitan liberal elite that dominate all political parties are in favour of open borders, salt of the earth working folk worry about their wages and the country they once recognised.

The charge particularly wounds the Labour Party. After all, it was founded to represent the interests of the working class in parliament.

The charge is that it has been captured by middle class professional politicians, who want to impose liberal values on working class communities which are in fact essentially small-c conservative. The immigration debate is offered as exhibit A.

So, new data, which would seem to contradict this story from the Ipsos-Mori monthly issues tracker, caught my eye.

Some context: Various polling houses carry put ‘issue trackers’ that ask voters what they think the most important issues facing the country are. Ipsos-Mori is the most prestigious. It goes back more than 30 years allowing for very long-term comparisions. And it is completely “unprompted”.

Most polling houses give a list of issues for voters to choose from. Ipsos-Mori gives no list, ensuring that participants are not led in any way.

By taking all responses from the January, February and March surveys, they could break the sample up into six segments divided by class – or more exactly, social grade – and age, each segment being statistically significant. In marketing terms, ‘social grade’ is usually taken to measure class. Think of class as a general concept but grade as a technical definition, like the difference between ‘speed’ and ‘miles per hour.’ Crudely put, ABC1 refer to ‘middle class’ social grades and C2DE refer to ‘working class’ social grades. This is the chart that Ipsos-Mori released. 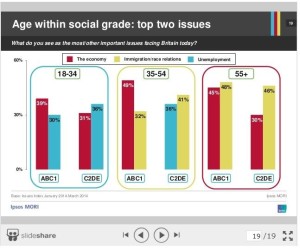 Ipsos-Mori released the chart to show how Britain divides along age and social grade lines on immigration, and it does: Older and C2DE voters are more likely to identify immigration as an important issue facing Britain than younger and ABC1 ones.

But what struck me was how much age appeared to explain immigration’s issue salience more than social grade. After all, immigration was the leading issue identified by 55+ year olds from both sets of social grades

So I asked Ipsos-Mori if they could provide the data for all six segments on which proportion of each group identified immigration as an important issue facing Britain. The data looks like this (Note that the issues mentioned are immigration/race/race relations in that Ipsos-Mori group these issues together): 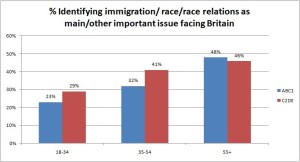 So in general the older groups, and C2DE groups are more likely to identify immigration as an important issue. But what’s interesting is that age appears to explain more than social grade.

A simple test is this: For each segment, does the segment with which it shares the most similar result share its age profile or its social grade profile. So for example,  young ABC1 voters (23 per cent), has a closer result to young C2DE voters (29 per cent) than mid-aged ABC1 voters (32 per cent) or older middle class voters (48 per cent).

It would appear from this that age, is more important than class in explaining immigration salience.

We can see whether segments tend to have a closer result to voters of a similar age range, or a similar social grade. The raw data and workings are here.

For comparison’s sake, we can repeat the exercise by looking at what proportion of each segment said that the economy was the biggest issue:

To see exactly how much both age and social grade explain both immigration and economy salience, we would need Ipsos-Mori to release the individual level data for their issues survey.

We can say there is some relationship between class and immigration salience. But this data suggests, that before we talk about social grade or class and the immigration debate, we must first talk about age.