A government consultation on zero-hours contracts has been flooded with 36,000 responses from people wanting to talk about problems and abuses. 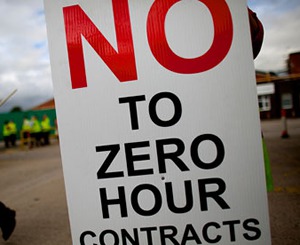 A government consultation on zero-hours contracts has been flooded with 36,000 responses from people wanting to talk about problems and abuses.

The consultation on exclusivity clauses in zero hours contracts, announced in December by secretary of state for business Vince Cable, ran for just 12 weeks and attracted an unprecedented response, with many respondents ignoring the consultation questions and wanting to tell their own personal story.

There are an estimated 582,000 people in the UK on zero hours contracts, according to figures from the Office for National Statistics (ONS).

During a Commons debate on zero hours contracts on Wednesday introduced by Labour MP Alison McGovern, parliamentary under-secretary of state for Business, Innovation and Skills Jenny Willot revealed that the government had received the large number of responses to the consultation:

Responding to the news, UNISON Head of Policy Sampson Low demanded government action on the issue, and said that zero hours contracts created a lack of a regular income and a power imbalance.

“The public and UNISON members recognised this and flooded the consultation with their stories and what they are really like for millions of people. We need action now,” he added.

Zero hours contracts have come in for criticism in recent years as they have become increasingly attractive to employers. One of the main objections is the exclusivity clause, which means that employees are unable to work for another employer even if their main employer is unable to give them any hours.

The Chartered Institute of Personnel and Development (CIPD) has argued that exclusivity clauses in zero hours contracts should be banned unless there is a legitimate business reason for using them.