Andrew Noakes of the Labour Campaign for Human Rights asks a pertinent question: what if the war on terror has turned out differently? 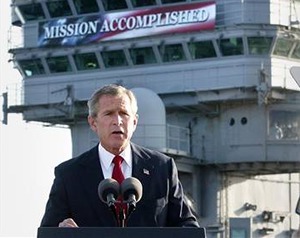 September, 2001. President Bush responds to the most catastrophic attack on America in the country’s history by uniting the international community around a new agenda – to combat terrorism and extremism wherever in the world it can be found.

The first move is to topple the Taliban regime in Afghanistan, which as well as harbouring Al Qaeda has been massacring Afghans and trampling on their rights for years.

But instead of abandoning the country and swiftly moving on to invade Iraq, Bush orders a concerted effort to build the new Afghan state and guard against the Taliban’s return. The NATO-led counter-insurgency takes care to avoid civilian casualties, respect Afghan customs and rights, and work through local partners on the ground. With the support of the population, they prevent the Taliban from becoming a threat and build the capacity of Afghan security forces.

Meanwhile, moderate former Taliban are brought into the new government, and a strong emphasis is placed on rooting out corruption and ensuring good governance and development. There is no Guantanamo Bay and no extraordinary rendition. There is a zero tolerance policy on use of torture.

President Bush restricts the use of armed drones to defined areas of conflict, avoiding the large-scale alienation of Pakistanis. He works with the government of Pakistan to develop an effective counter-insurgency and development strategy that prevents the Pakistani Taliban from ever becoming a threat.

He also attempts to win the support of Muslims all over the world by investing in a diplomatic initiative to resolve the Palestinian-Israeli conflict.

All over the world, from Nigeria and Mali to Somalia and Yemen, America and its partners invest in development, governance, and counter-insurgency that respects human rights. With their violent tactics and extremist ideology, Al Qaeda and its allies find themselves marginalised and without support.

And instead of feeling a strong sense of alienation and anger, Muslim communities in Britain get behind the war on terror and help to prevent radicalisation from taking hold in the UK.

It could all have been so different.

I’m not one of those who believe Britain and the USA should have done nothing after 9/11. What I disagree with is the strategy that alienated Muslims around the world, divided the West, saw the abandonment of a just war in Afghanistan for an unjust one in Iraq, and created far more enemies than it killed.

And it matters today, because the war is still ongoing even if the West isn’t as directly engaged as we used to be – it’s going on in Pakistan, Afghanistan, Somalia, Yemen, Mali, Kenya, Nigeria, and in other countries the world over.

It’s not over and we need to re-engage in an effective way. The war on terror is never going to be won or lost on the battlefield. At its heart it’s a political war, won and lost in the homes and conversations of Afghans, Iraqis, Palestinians, Pakistanis, Nigerians, Britons, and others all around the world. You can’t defeat terrorists only by sending an army.

They don’t fight large, open battles because they can’t win that way. That’s why “mission accomplished” was in retrospect so farcical.

That’s why all the things that alienated people, from Guantanamo and torture to Iraq and drone strikes, didn’t work.

But there were things we could have done that would have won support.

Building a reliable government in Afghanistan, respecting the rights and customs of Afghans, investing in development, good governance, and responsible counter-insurgency across the world, creating a political narrative of Western friendship with the Muslim world by trying to settle the Palestinian-Israeli conflict – these actions could have had a beneficial impact.

And they still can. We could adopt a new approach to counter-terrorism that puts public perception at its heart.

This is what the Labour Campaign for Human Rights has been arguing for, and it will be the focus of our discussion in Parliament on 19 March with the shadow defence minister, Amnesty International, the War Studies Department of King’s College London, and others.

All are welcome to attend as we explore our idea of a new vision for counter-terrorism.