On Thursday protesters descended on City Hall to express their anger at Mayor Boris Johnson and over 20 UK councils participating in the MIPIM conference. 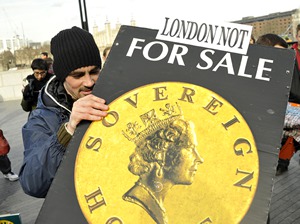 By William Ronan of the Radical Housing Network

Waking up at 6.30am to watch property firm employees in lycra eat croissants isn’t the most appetising start to a Wednesday morning.

These cyclists weren’t just going for a mid-week jaunt into the countryside, however, but are currently cycling to the infamously decadent MIPIM conference – the world’s largest real estate fair.

I joined over 100 residents and housing campaigners from across London to descend on City Hall on Thursday 6 March to express our anger at Mayor Boris Johnson and over 20 UK councils participating in the MIPIM conference, which takes place from 11 to 14 March in Cannes in the south of France.

The fair has a €1,600 entry fee and brings together 20,000 investors, developers, local authorities, and banks, including Savilles, the British Property Federation and Goldman Sachs.

Walking around different boroughs in London it isn’t hard to spot the effects of contracts between councils and profit-hungry property developers as council housing stock is ripped down and replaced with shiny new luxury apartments.

The question is, where do all the old residents go?

The reports explain a common story of services to council housing being run down, the residents forced to move out, and new housing complexes built with totally inadequate ‘affordable’ housing which means that the original residents cannot afford the new rent.

It’s deals that are done in Cannes by our ‘representatives’ that cement gentrification processes of neighbourhoods which mean that ordinary Londoners are being forced to the edges of the capital. The contracts between councils and developers are essentially part of a strategy to socially cleanse areas of London and make them more palatable for the high-earning middle class.

This is why members of tenants organisations, homeless groups, housing co-operatives, community food-growers and squatting campaigns came together on Thursday to declare that ‘London is not for sale’.

The day was filled with a host of activities from disrupting the media spectacle of MIPIM cyclists leaving for France, to hundreds of estate agent signs stickered to read ‘LONDON NOT for sale’ and made into a giant house at the steps of City Hall.

A ‘speak-out’ gave opportunity for people to share their stories of the housing crisis and difficulties to find secure, affordable housing in the UK capital. During which Liliana Dmitrovic of ‘People’s Republic of Southwark’ stated:

“We will not let our land, our cities, and our homes, be sold by politicians to line the pockets of developers. These are the individuals responsible for the housing crisis, and we believe that everyone deserves a decent home.”

As the day’s protests came to a close we were reminded that the demonstration will be part of protests across Europe in response to a call from the ‘European Action Coalition for the Right to Housing and the City’ including a ‘People’s Tribunal’ during the Cannes conference on Wednesday the 12 March.

With the new Radical Housing Network taking action on issues such as MIPIM which is relevant to housing needs across tenure and geography, the dots are being joined between lucrative ‘regeneration’ contracts, astronomical rent rises, and communities being displaced.

This is bad news for Boris, sell-out councils and developers. Especially as the last words on the mega-phone yesterday were, “This is just the beginning!”