By far the biggest gainers from an increase in the 40p threshold are families in the top income decile. 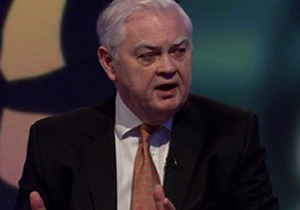 On Newsnight last night former Conservative chancellor of the exchequer Lord Lamont called on George Osborne to use next week’s budget to increase the threshold at which people start to pay the 40p income tax rate.

He was backed by another former Conservative chancellor, Lord Lawson, who said in a Daily Telegraph interview that the number of people paying higher rate tax should be much closer to what it was in the 1980s.

The former chancellors – and John Redwood quoted in the Times – think the move is necessary to help ‘middle-income earners’.

The coalition has increased the starting point at which people pay income tax to £10,000, but to prevent higher rate taxpayers gaining more than basic rate tax payers from this move, it has also narrowed the basic rate tax band.

As a result, the income level at which people start to pay 40p has not gone up as fast as wages and there has been a big increase in the number of people paying the 40p rate. It is already over four million and expected soon to reach five million, compared to less than one and a half million at the end of the 1980s.

We have analysed the distributional impact of increasing the personal tax allowance by a further £500, to £10,500, and compared it with the effect of increasing the higher rate threshold by £2,500. Both policies cost around £2.5 billion in lost income tax.

Effect on disposable income of changes in tax allowances % 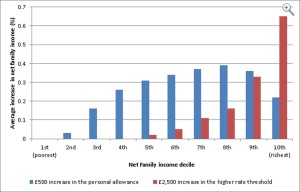 Increasing the 40p threshold is not, therefore, a policy that helps ‘middle-income earners’.

Clearly, Lord Lamont, Lord Lawson and John Redwood have an inflated notion of the pay of a middle-income earner in the UK. According to the Office for National Statistics, the average amount a full-time employee was paid before tax each week in April 2013 was £517. This is the equivalent to £27,000 a year. The 40p threshold is £41,450 – more than 50 per cent higher.

Increases in the personal tax allowance are a better way of helping middle-income earners. Our analysis shows that the biggest gains – as a proportion of disposable income – are made by families in upper half of the income distribution (though those in the top decile do not do so well).

They do not, though, help low income families.

Although the coalition trumpets the number of people it has taken out of income tax altogether, our analysis shows families in the bottom two deciles barely gain at all from further increases in the personal tax allowance.

A better way to help many of this group would be to increase the starting point at which National Insurance contributions are paid.