The DWP has been advising jobcentres on referring benefit claimants to food banks - despite the government's insistence that food banks do not form part of the welfare system. 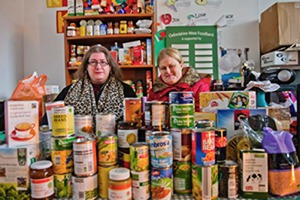 New documents show that the Department for Work and Pensions has been advising jobcentres on referring benefit claimants to food banks – despite the government’s insistence that food banks do not form part of the welfare system.

The Guardian has obtained documents under the Freedom of Information Act which show that the DWP has created a procedure for jobcentres to follow when claimants say that they cannot afford food. One of the documents in question refers to a ‘Foodbank Referral Service – High Level Process’.

This is in spite of the DWP’s claim that they are merely ‘signposting’ claimants in the direction of food banks, not operating a referral service. DWP officials claimed that the ‘high process’ document had been released by mistake by the officials dealing with the Freedom of Information request.

The DWP also claimed that in the current documentation, the word ‘referral’ has been changed to ‘signposting’. However, the actual process appears to be the same.

The documents show that when referring someone to a food bank, jobcentre staff fill in a form with the person’s details, but another document instructs them not to describe this as a ‘food voucher’. This is presumably to make it look as though the referral service is not part of the welfare system.

The DWP’s claim that they do not hold or collect information on the usage of food banks was also contradicted, by parts of the documents which show that each jobcentre is supposed to record how many claimants have been referred to food banks.

Among the documents there is a chart which contains four reasons for referring a claimant to a food bank: hardship caused by benefit changes, benefit delays, the refusal of a benefit advance, and the advance not being sufficient to meet the claimant’s needs.

Labour’s shadow public health minister Luciana Berger highlighted the documents as evidence that the DWP has established a system for referring people to food banks, and said that the DWP’s claim that they are not relying on food banks to plug holes in the welfare system was unravelling.

Statistics from food bank charity the Trussell Trust show that the number of people using food banks has risen in recent months: 614,000 adults and children received food parcels from the Trust’s food banks in the first nine months of 2013-14, compared to 350,000 for the whole of 2012-13.

In 2011 the DWP and the Trussell Trust reached an agreement which enabled jobcentres to refer (or ‘signpost’) people to food banks. Last year the DWP changed the relevant forms to remove the reason why someone may have been sent to a food bank.

This arguably makes it more difficult for food bank staff to ascertain whether people have been referred as a result of the government’s welfare reforms.