A compendium of right-wing scare stories about the EU. 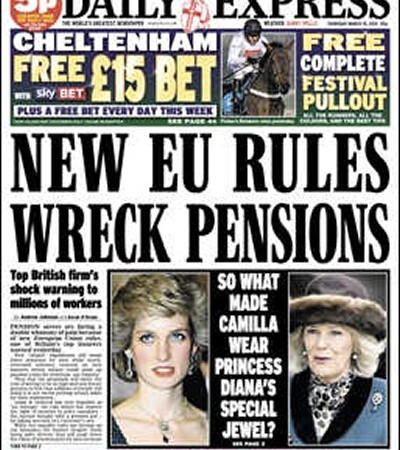 In light of Ed Miliband’s announcement yesterday that Labour would not hold a referendum on Britain’s membership of the EU unless there was a significant transfer of powers to Brussels, the right-wing press has erupted in fury.

“Ed Miliband has been on the receiving end of an “onslaught” from both Tory and Labour Eurosceptics after effectively ruling out an EU referendum,” thundered the Mail.

Indeed, the right are not happy.

As a consequence, expect a resurgence in EU scare stories as we approach the 2015 General Election – the purpose being to demonstrate just how tyrannical the European Union behaves towards ‘the little guy’.

After all, the right-wing press have history in this respect don’t they? Remember these?

Last year the Daily Express reported that, if a resolution from the European Parliament were to become law, “all the political parties in the UK will have to impose female gypsy candidates on the electorate and get them into Parliament”.

The truth: The story was described by an MEP in a letter sent to the Express as “fabricated from beginning to end”. And it was. The powers the EU has are given to it by member states through unanimously agreed treaties. These treaties include nothing about intervention in how candidates are selected for national elections.

2) The headline: the EU…has decreed that condom dimensions should be harmonised across the seamless Continent – (The Independent on Sunday, page 25, 12 March 2000)

The truth: Again this was false. The European Standardisation Committee (CEN) referred to in the article is a voluntary body which has nothing to do with the EU.

Last year the Daily Mail reported that a number of British garden favourites were to be banned from garden centres because of plans to improve EU rules and cut red tape.

The truth: In reality the EU commission was proposing to remove regulations from garden plants rather than impose new ones. The EC proposal states that ornamental plants will no longer be covered by most of the rules on “plant reproductive material”. This would mean that in future Garden plants would only need to comply with a few general rules. The Mail has got things completely the wrong way round, probably intentionally.

“Fancy a nice plate of gadus morhua and chips? You may be tucking into them under proposed regulations from Brussels bureaucrats. They want fish to be called by their Latin names so the terms can be understood throughout the European Union.”

The truth: The European Commission had proposed clearer labelling on food products so that consumers were fully aware of what it was they were buying. If it is cod then it can be labelled as cod; if it isn’t, then it can’t be. In all honesty it’s hard to see what the problem is.

“For centuries the people of Kent have called their county the Garden of England. So they might find it quite a surprise that – according to the European Union at least – they are actually part of France. Along with next-door Sussex, Kent has been rolled in with the Calais areas on a map drawn up for Brussels.”

The truth: The planned database was created to help support environmental protection in the EU rather than redraw the map of Europe. The idea was to improve Europe’s ability to protect biodiversity and fight pollution. It had nothing to do with wiping Britain off the map.

Again, this is completely untrue. The two measures which were introduced relate to minimum standards for the energy efficiency of televisions and a TV energy-labeling scheme which already exist for washing machines and fridges. There was no plan to ban plasma televisions, and the purpose of the labelling scheme was to ensure that consumers knew how much their new television would cost them in terms of energy.

7) The headline: Traditional pizzas are to be outlawed by the EU under new laws regulating their diameter and depth (Daily Mail, p.23, 17 November 1994)

The truth: I’m not entirely sure where this idea came from, but  it is completely without foundation.

“Barmy EU bosses are threatening to BAN rocking horses. A new ‘safety’ law insists that toys for kids to ride indoors must be no more than 2ft high. That would nobble rocking horses – and mini carousels.”

“The EU has declared a crackpot war on busty barmaids – by trying to ban them from wearing low-cut tops. Po-faced penpushers have deemed it a HEALTH HAZARD for bar girls to show too much cleavage. And in a daft directive that will have drinkers choking on their pints, Brussels bureaucrats have ordered a cover-up. They say barmaids run a skin cancer risk if they expose themselves to the sun when they go outside to collect glasses. Last night the move was blasted as an affront. Annie Powell, of real ale group Camra, raged: “It’s just another blatant example of Europe gone mad.”

The truth: The EU rules, voted on in 2005, said nothing about barmaids wearing low-cut tops, but rather required employers to assess the risk of skin and retina damage for workers who spent a lot of time working in the sun.

“Eurocrats have ruled that the kilt is ‘womenswear’. Spaniard Pedro Solbes, an EU commissioner, insists our national dress should be listed as a skirt on official forms. And kiltmakers could be fined up to £1000 if they don’t comply….”