Tony Blair's support for the Egyptian military puts the lie to the former prime minister's repeated declarations of support for democracy and human rights. 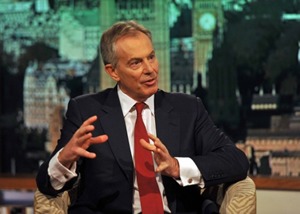 After a meeting with the commander-in-chief of the Egyptian armed forces field marshal Abdel Fattah al-Sisi, the former British prime minister Tony Blair has offered his support to the military-backed regime which overthrew Egypt’s first democratically elected government in a coup d’etat last July.

Blair called on the international community and his “colleagues in the West” to “support the government here in Egypt”, which he claims is devoted to creating an “open-minded society” and “modern economy”.

In light of his past record, Blair’s comments are not all that surprising. As prime minister, he was a staunch ally of most of the region’s dictatorships, and even extended a hand of friendship to the government of Uzbekistan, arguably one of the world’s last truly totalitarian regimes.

The Blair government also approved the sale of arms to colonel Gaddafi of Libya, some of which may have been used to kill unarmed protesters in 2011, and according to official papers, considered president Assad of Syria for a knighthood in 2002.

Since leaving office, Blair has provided consultancy to the governments of Vietnam, Colombia and Kuwait, all of whom have been accused of major human rights abuses in recent years. He has also earned millions as an adviser to the dictator of Kazakhstan, reportedly to help reform the country’s notoriously brutal police force.

Months into the job, however, Kazakh police massacred fourteen oil workers in the town of Zhanaozen and were subsequently accused of “entrenched torture” by Amnesty International.

In fact, since Blair’s arrival, the human rights situation in Kazakhstan “has deteriorated markedly”, according to a report by Human Rights Watch.

Far from “making a difference” and helping with reform, “his efforts may have given the government in Astana a veneer of respectability, just as authorities imposed tougher restrictions on human rights. Blair’s stance”, they conclude, “is at best opportunistic and at worse indifferent towards people suffering abuses in the country”.

In a damning indictment of Blair for “propping up the brutal Kazakhstan regime”, Nick Cohen wrote that “the moral decline” of “the one-time champion of democracy” is “now complete”. His endorsement of the regime in Egypt may be a new low.

For a start, it comes just days after Egypt’s security forces killed dozens of protesters on the anniversary of Egypt’s revolution in January, and coincides also with the imprisonment of two British journalists for the ‘crime’ of “airing false news.” The timing of the meeting with Field Marshal Sisi thus suggests an indifference to the abuses suffered both by Egyptian and British citizens.

Blair’s reading of events is also strikingly one-sided. He blames the Muslim Brotherhood for “taking the country away from its basic values of hope and progress”; however no group has done more to steer the country away from democratic progress than the military-backed government Blair supports.

In 2012, Freedom House, a leading authority on levels of democracy, upgraded Egypt from ‘Not Free’ to ‘Partly Free’ on account of the “the removal power of the Supreme Council of the Armed Forces” and the holding of the first presidential elections in Egyptian history which came “close to international standards”.

Serious human rights abuses continued under President Morsi, though the country remained in a state of democratic transition in spite of the government’s growing authoritarianism.

In their most recent report, however, the Washington-based NGO downgraded Egypt back to ‘Not Free’, citing “the overthrow of elected president Mohamed Morsi, violent crackdowns on Islamist political groups and civil society, and the increased role of the military in the political process” as the main reasons for the decline in political rights.

They concluded that, since the coup in July, the country has seen “six months of general democratic backsliding”, rather than progress, as Blair seems to suggest.

The findings of Amnesty International corroborate this:

“Egypt has witnessed a series of damaging blows to human rights and state violence on an unprecedented scale over the last seven months. Three years on, the demands of the ‘25 January Revolution’ for dignity and human rights seem further away than ever. Several of its architects are behind bars and repression and impunity are the order of the day.”

Blair maintains, however, that “we should support those people who want the open-minded society and the modern economy”, which “means we support the government here in Egypt”.

According to Freedom House, “the so-called roadmap to democracy laid out by the military and its allies is nothing more than a charade designed to solidify their authoritarian rule”. By outlawing the Muslim Brotherhood, which is now the country’s main opposition party, “Egypt’s leaders showed in December that they have no intention of building an inclusive, participatory democracy”.

Why, then, is Blair running with the line that the new regime supports an “open-minded society” and is “bringing in this new era for the people of Egypt”?

Unlike Egyptians who are fed little else but state propaganda, Blair cannot plead ignorance. There is simply no way that he could not have been aware of the mass arrests, the massacres, the jailing of journalists, the outlawing of opposition parties and the widening crackdown against secular activists by the government he openly supports.

But Blair still asserts that the government wants an “open-minded society”, a claim no informed person could believe. The only plausible explanation for this is that Blair is deliberately spinning for Egypt’s military rulers, effectively acting as a mouthpiece for the new regime.

For those not yet convinced, this finally puts the lie to Blair’s repeated declarations of support for democracy and human rights, both in Egypt and the Middle East as a whole.

6 Responses to “Why is Tony Blair spinning for Egypt’s military rulers?”