Britain's food banks have been to be blocked from claiming millions in EU aid by Tory MEPs. 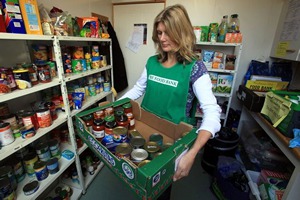 Britain’s food banks have been blocked from claiming millions in EU aid after Tory MEPs voted against the measure in the European Parliament.

The European Parliament voted by a large majority today (592-61) to endorse EU funding which would have resulted in a £3 million fund being made available for food banks in the UK to claim.

The government had previously sought to block the fund in inter-governmental negotiations, and today won a concession in the European Parliament that the money can be used for ‘immaterial’ but not ‘material’ aid. This means in practice that means Britain’s food banks will be prevented from claiming from the £3 million fund allocated to the UK.

Labour MEP Richard Howitt, who helped negotiate the fund, said it “defied belief” that David Cameron’s government had “sought to block a fund for ‘the most deprived'”.

“The cost of this government’s anti-European ideology, coupled with its bitterly felt cost of living crisis, is literally taking food from the mouths of children,” he said.

“The government says measures of this kind are best delivered by individual nations via their own social programmes – yet there aren’t any government plans to aid food banks from national budgets,” he added.

Half a million people received three days emergency food assistance from a Trussell Trust foodbank between April and December 2013, according to the organisation’s latest figures.