The thugs patrolling Bangkok’s streets are prepared for violence and have the financial backing of a tiny group of the wealthiest people in the country. 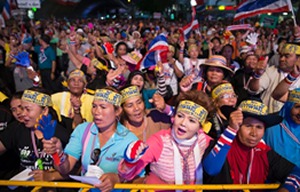 Andrew Spooner reports from Bangkok, where the thuggish and anti-democratic PDRC is taking the country to the brink of civil war

It is the day before the general election and a gun battle is raging in broad daylight just north of Bangkok’s city centre.

There, masked gunmen – armed with what expert military sources have described as Thai Army-issued weaponry – are firing at pro-democracy Red Shirt activists and local voters who’ve been attempting to allow the delivery of ballot papers from a depot blockaded by thugs from the violent, fascistic  ‘protest’ movement, the Democrat Party-led People’s Democratic Reform Committee (PDRC).

The Thai Democrat Party and their street front, the PDRC, don’t really do democracy.

After boycotting this election, the second general election they’ve boycotted in eight years, this political party – led by dual British/Thai citizen, the Eton and Oxford educated Abhisit Vejjajiva, (the word ‘abhisit’ in Thai directly translates into English as ‘privilege’) who has recently been indicted for the murder of unarmed pro-democracy protesters in 2010 – have now moved their strategy back to the courts in the hope that the Constitutional Court and Election Commission will nullify the results of the Feb 2nd general election.

Thankfully, so far, the Constitutional Court has refused the Democrat’s petition but to lodge these complaints the Democrats have claimed the election was neither ‘free nor fair’. Of course, what the Democrats fail to mention is that it was their actions –  such as shooting at and beating up ordinary voters who dared to try to vote – that were the root cause of the election being neither free nor fair.

One net result is that the so-called ‘Party of the Army’ are now being fully exposed to the opprobrium of the international community – Time magazine’s withering oped ‘Thailand’s Democrat Party Is Hilariously Misnamed‘ points to a feeling towards the Thai ‘Democrat’ Party. Such is the shame the UK’s Liberal Democrats feel towards the Thai Democrats, who are their allies in the Liberal International, their press office issued a blunt statement to LFF that the Lib Dems don’t have ‘nor have any intentions to have’ any ‘programmes or formal associations’ with the Thai Democrats.

But this failure to grasp the simple mechanics of democracy was ever thus with the Thai Democrats. The only time they seem able to achieve power is not through democratic legitimacy or by producing a raft of policies that will attract votes, but by benefitting from a mix of street thuggery, politicised judicial and administrative interventions and support from the coup-happy Thai Army.

In their almost 70-year history they have never won an outright election victory and were last the biggest party in the Thai Parliament in 1992 with only a 20 per cent vote share – strangely, whilst despised by large sections of the Thai population, their allies in both the Thai aristocracy and the military are often on hand to ‘aid’ them to form a government.

Despite the desperate and pathetic denials by Abhisit – the PDRC leadership is made up entirely of former Democrat Party MPs and ministers and Abhisit himself has routinely attended and spoke at PDRC rallies – it’s explicit that the PDRC are nothing more than a Democrat Party front.

Unfortunately the often ridiculous coverage of the PDRC rallies from the international media – the BBC’s Jonathan Head has not only been asking questions on behalf of Democrat Party members, he also tweeted that he ‘hugged’ a member of the PDRC; it has also become routine to describe this band of thugs as ‘colourful’ and ‘friendly’ – where they are portrayed as ‘legitimate’ protesters, with equal standing to a democratically elected government belies the fact that they are little more than a rabble, with well-founded rumours that they are funded by Thailand’s richest and most corrupt families.

Over the weekend the elections were held I was in central Bangkok and visited several of the polling booths and the PDRC/Democrat Party rally sites. The rally sites themselves occupy several key intersections in the centre of Bangkok, but on all the occasions I visited not once did the PDRC supporters total more than 1,000 people.

The rallies themselves are astonishingly well-funded with rock concert-style stages set-ups, including massive lighting rigs, giant TV screens and large PA sound systems whilst there is free food and free tents on offer for supporters. In addition PDRC leader Suthep Thuagsuban was recently photographed staying in the luxury US$1000 a night ‘Majesty Suite’ in Bangkok’s five Star Dusit Thani hotel.

On the outer rim of the rally sites are military-style sandbagged blockades where thuggish looking and sometimes drunk PDRC/Democrat Party ‘guards’ threaten and intimidate those entering ‘their’ area of control, stopping and searching, at a whim, ordinary people passing through. There have been a number of reports of the PDRC ‘guards’ extorting money and even kidnapping and torturing persons who they deem a ‘threat’ to the rallies.

These thugs – I was told by a former Thai government cabinet minister that the leader of the PDRC, Suthep Thuagsuban, has deliberately recruited the most vicious low-level criminals he can find to act as guards – also patrol inside the rally sites and on each of the three occasions I made an attempt to photograph them they become instantly abusive and threatening.

So where now for Thailand?

Over the last 48 hours (14/15 Feb) there have been some attempts by the police to clear what Forbes magazine accurately described as Thailand’s own version of Mussolini’s Blackshirts from the streets but with the Thai Army – who are beyond any form of civilian and democratic control –  offering these neo-fascists ‘protection’ it is hard to imagine they will be completely removed from Bangkok’s streets just yet.

The Feb 2 general election is still uncompleted, with a couple of dozen constituencies still to finalise voting, and with the present Pheu Thai government operating at a ‘caretaker’ level a stalemate ensues – readers should be reminded that despite the low turnout and all the Democrat Party-led intimidation, violence and threats, Pheu Thai will certainly outpoll the Democrat Party’s 2011 vote tally.

As events in Bangkok today reveal – two police officers and two protesters have been killed – the thugs patrolling Bangkok’s streets are prepared for violence and still have the financial backing of a tiny group of the wealthiest persons in Thailand meaning that the only choice for the caretaker government is to move slowly and carefully. The threat of a serious escalation of violence and possibly civil war is now very real.