On this day 25 years ago, the Ayatollah Khomeini issued a fatwa calling on Muslims to execute everyone involved in the publication of Salman Rushdie's 1988 novel The Satanic Verses. 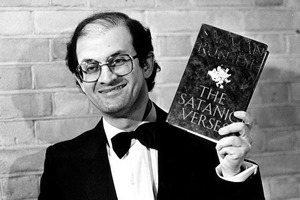 In the battle of words on the right to free speech and the right to be offended, one day stands out more than any other as a significant turning point.

On this day 25 years ago, the Ayatollah Khomeini of Iran issued a fatwa calling on Muslims of all lands to execute everyone involved in the publication of Salman Rushdie’s 1988 novel The Satanic Verses.

Debates today, from Jesus and Mo to the freedom to criticise religion in public, always relate back to one particular moment in recent history: The Rushdie Affair.

Largely ignored protests had already taken place, in Bradford and Bolton, but it was on that day that the Iranian Ayatollah, on seeing related unrest in Pakistan on the television, immediately telephoned an assistant and dictated a fatwa to be broadcast to Iranians and addressed to Muslims globally. He hadn’t even read the book.

The penalties kept growing. On the 12th anniversary of Khomeini’s order, Ayatollah Hassan Saneii, the head of the 15th of Khordad Foundation, reissued the death sentence with a promise of a $2.8 million reward for Rushdie’s assassins, despite the well known bankruptcy of the organisation.

Six years later, again February 14, Iran’s official state news agency reported that “The fatwa by Imam Khomeini in regard to the apostate Salman Rushdie will be in effect forever”.

Back at home, Tory press outlets refused to grant Rushdie the break he deserved. As the original fatwa was issued to the writer, the tabloids portrayed him as someone purposely putting national security in jeopardy; mainstream politicians publicly talked about how long it would be until he stopped receiving protection.

Appearing on Question Time in 2007, Shirley Williams, then an adviser on Nuclear Proliferation to Gordon Brown, mused on the decision to award Rushdie a knighthood for literary achievement. She said:

“This is a man who has deeply offended Muslims in a very powerful way, who has been protected by the police against threats of suicide for years and years, at great expense to the taxpayer, and frankly I think it was not wise and not very clever to give him a knighthood”.

The notion that we ought to be angry at Rushdie because of the taxpayer expense is totally perverse. Tantamount to blaming him for the irresponsible actions of extremists and fanatics who wanted to take his life.

And they mean it. The Rushdie Affair is comparable to the much earlier attempt at banning Egyptian writer Naguib Mahfouz’s The Children of Gabalawi, with its similar allusions to the Prophet Muhammad. One Egyptian imam was quoted commenting:

Sadly someone nearly succeeded in behaving in this manner. In 1994, despite his police protection, an Islamic extremist got to the 82-year-old Mahfouz and stabbed him in the neck outside his Cairo home.

Kenan Malik, writing in the Times about the Rushdie Affair in 2008, pointed out that: “Rushdie’s critics lost the battle but won the war. They never prevented the publication of his novel.”

With the incident of Mahfouz, Islamist success was in rendering the writer incapable of writing for more than a few minutes a day. Subsequently he produced fewer and fewer works; the world denied the fruits of a beautiful writer.

In July 2009, Germaine Greer waded into the debate on Rushdie on Newsnight saying “all [he has] to do is apologise, go on [his] knees to Mashhad or whoever, then do it to save [his] life”. Clearly she had forgotten the times that Rushdie did apologise.

On February 17, 1989, Iranian leader Ali Khamenei sent a communication out to Rushdie that he could be pardoned if he apologised. The very next day Rushdie apologised as suggested. The official Iranian news agency, IRNA, originally said Rushdie’s apology sufficed. On February 19, 1989, Khomeini issued an edict saying no apology could lift his death sentence.

On December 28, 1990, Rushdie penned a column in The New York Times saying: “I am able now to say that I am a Muslim,” repudiated his book, and failed to condone new translations of it. He grovelled, but it got him nowhere.

It seems fanatics will be fanatics; how we had politicians and media outlets then, as well as commentators today, who hold the idea so tightly that free speech ought to be curbed to kowtow to the sensitivities of an immoderate few is beyond belief.

And isn’t it a huge coincidence that in the same week as the anniversary of the Rushdie Affair, Penguin – a publisher that refused to back down in printing The Satanic Verses, even after  Norwegian publisher William Nygaard was shot three times and left for dead outside his Oslo home in 1993 – plan to withdraw Wendy Doniger’s book The Hindus, a publication which has offended Hindu extremists. I wonder how many of them have read it?

It was pointed out a few years ago by Inayat Bunglawala – a person who himself came to regret the response of some Muslims such as himself who once called for a ban of The Satanic Verses – that once upon a time the leader of the far-right Dutch Freedom Party, Geert Wilders, called for the Qur’an to be banned because he found some passages in the book offensive. We didn’t listen to him, why we would we do so to any other extremist?

But for a defense of free speech, there’s nobody better but Rushdie himself. Writing about his book, the themes of confusion in secular lands, and the right to challenge prevailing thought, he said:

“Language and the imagination cannot be imprisoned, or art will die, and with it, a little of what makes us human.”