There was plenty of data out this week suggesting a bleaker economic picture than that painted by the government and the media. 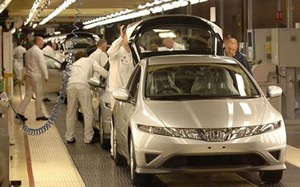 This week’s figures on manufacturing growth from the Office for National Statistics (ONS) proved to be weaker than expected and they demonstrate the need of a robust manufacturing strategy and leadership from the government – neither of which is happening.

The ONS published figures on Friday showed that manufacturing output rose by 0.3 per cent in December last year – less than the 0.6 per cent predicted.

On top of that news comes a warning that lagging productivity poses a risk for the UK’s medium term outlook and recovery.

The National Institute of Economic and Social Research (NIESR) has warned that low productivity would continue to pose a challenge for the economic outlook as it limits wage growth.

“Our forecast remains one of a gradual improvement in productivity, but continued stagnation poses a downside risk to the UK’s medium-term prospects,” NIESR said.

The NIESR also pointed out that growth was being fuelled by the housing market – and it expects this will continue for the next two years.

This is hardly a basis for re-balancing the economy as current growth and rising employment (through agency and temporary work) has not brought about an upturn in productivity.

The fact is that the figures paint a more realistic picture of what is happening in the economy than that being spun by the government and the media.

8 Responses to “The other British economy: low productivity and no manufacturing strategy”