Voting is no longer the only way in which people can be politically engaged. 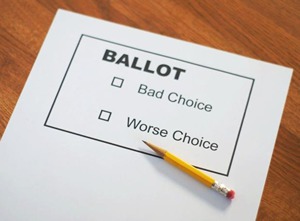 “We are witnessing the end of history,” argued Francis Fukuyama. The year was 1989 and, with Western liberal democracy spreading across the globe, the American political scientist claimed that humanity had reached the peak of its socio-political evolution.

For Fukuyama, history’s march had taken us as far as it could; we had reached the summit.

I’m not so sure though. Democracy isn’t like a mountain with a series of navigable peaks – it is more like a beach, the sands of which are constantly shifting. At the time of the Swing Riots and the Great Reform Act in 1832, allowing an extra 0.02 per cent of the population the right to vote in rigged elections was seen as quite a radical step forward for democracy.

Even though we now have universal suffrage in many other ways, the fruits that were promised from democracy have still not been forthcoming.

As George Monbiot has reported, a new transatlantic trade deal could give powerful corporations the right to sue governments who try to defend their citizens.

Iain Duncan Smith’s all-out assault on the welfare state has led to a doubling in the number of malnutrition cases with a record 5.8 million people in Britain struggling to afford everyday basics like food.

And in June of last year Edward Snowden revealed to the world that our government, in collaboration with America’s National Security Agency, has been collecting electronic data on millions of people around the world and tapping the phones of heads of state.

Unless Fukuyama enjoys especially unhappy endings, it is unlikely that this was the triumphant ‘end of history’ that he had envisaged. And whilst politicians are failing to live up to the classical ideals of democracy, the public are finding new ways to engage (or not) with the political system.

Across Western Europe membership of political parties is falling. Whilst the Conservative and Labour Party in Britain once boasted memberships of 3 million and 1 million people respectively, those numbers have collapsed to 134,000 and 193,000 today.

At the same time, turnout at elections has fallen from 84 per cent in 1950 to 65 per cent in 2010 – and that was a particularly good year by modern standards. Like the proverbial tree in the woods, what happens to a political system when there is no one there to invest in it?

The philosopher Barry C. Smith has argued that, as society becomes increasingly more complex and interconnected, so our cultural, political, and economic tastes are stretched and become more diverse. Rather than become a member of a political party and sign-up to all its policies, people are joining campaign groups like UK Uncut and Occupy that offer them a completely new, community-led vision of society.

Thanks to the liberalising effects of the internet, voting is no longer the only way in which people can be politically engaged.

The vexing question for political parties is how to respond. So far the government has thrown its toys out of the pram by introducing the Lobbying Act and trying to stamp out these new political movements instead of meeting them on their own terms. Like a river re-channelled by human interference, however, these defences can only hold for so long.

It’s a question that myself and other members of that intrinsically ‘democratic’ organisation, the Green Party, have often had to grapple with: how to balance fighting for a new political and economic structure whilst working within the confines of the old one. Our policies come from our members who present them and vote on them at conference.

That means that if there is the evidence-base and support for a particular policy, it will be adopted. The party also actively engages with those groups like Occupy who are taking community campaigning into a whole new realm.

Rather than trying to trample on the work of campaigning organisations, I’m proud to actively work with movements which are finding new ways to turn-up the volume of the public’s political voice.

Like the Swing Rioters of 1832, none of us can say what brave new world of political democracy we will have fashioned in 180 years time. What is certain is that the best way to be a part of that future is to move with the shifting sands rather than trying to hold back the tide.

8 Responses to “Politicians must embrace the shifting sands of democracy”