The following are five things the coalition has done which, in light of recent severe weather, it has been wise enough to shutup about. 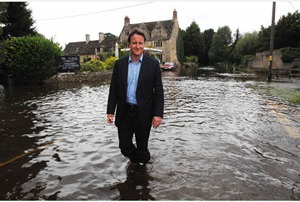 There is significant evidence that climate change is a factor in the extreme weather that has hit the UK in recent months, the Met Office’s chief scientist Dame Julia Slingo has said.

Ms Slingo reflects a growing consensus among experts that Britain is likely to see more extreme weather as a result of climate change.

It is perhaps unsurprisingly then that in light of the recent flooding ministers have been trying to appear more concerned about climate change than they had previously.

The following are five things the coalition has done which, in light of recent severe weather, it has been wise enough to shutup about:

1) Appointed Owen Paterson, a man who is unconvinced of man-made climate change, as environment minister

According to the Independent, in his first 14 months in office environment secretary Owen Paterson did not have a single briefing on climate change. Somewhat contradicting his avowed scepticism, Paterson has also myopically (and absurdly) suggested previously that climate change could provide opportunities for the UK, such as fewer people dying in cold winters. Presumably flooding isn’t one of these “opportunities”.

According to media reports back in November, David Cameron ordered aides to “get rid of all the green crap” that he believed was responsible for pushing up families’ energy costs. Downing Street denied the allegations, but it did not seem particularly far-fetched to suppose that the prime minister might have said such a thing. He was after all seemingly intent on blaming the rise in household energy bills on so-called ‘green levies’.

A proposal to include a target to decarbonise the UK’s electricity generation by 2030 was defeated in the House of Commons last year after the coalition whipped its MPs to vote against it. The measure would have obliged the government to introduce a target to decarbonise the power sector by 2030 to a level of 50 grams of carbon dioxide per kilowatt hour of electricity (i.e. 50gCO2/kWh) down from 486gCO2/kWh at present.

Initially supportive of the proposal, David Cameron backtracked after encountering vehement opposition from his chancellor George Osborne, who is against the setting of any carbon targets.

As the Guardian reported last year, the chancellor has publicly stated that he does not want Britain to be a world-leader in fighting climate change because of the potential ramifications on competitiveness in the international energy markets. This, despite saying in 2010 that “greening our economy can be a win-win solution”.

As a result of the chancellor’s comments Friends of the Earth accused Osborne of a “shameless lack of leadership”.

5) Tax breaks for polluting industries and cuts to renewable budgets

In recent years George Osborne has gifted billions of pounds in tax cuts to the oil and gas industry to incentivise drilling off Britain’s coastline. At the same time, the chancellor has presided over the loss of thousands of green jobs, cut the budget for onshore wind farms by 10 per cent, stripped the Green Investment Bank of the ability to borrow and lend and has done a U-turn on airport expansion, with plans back on the table to increase airport capacity in the South East.