Dominic Raab's amendment to the Immigration Bill is based a selective interpretation of the data. 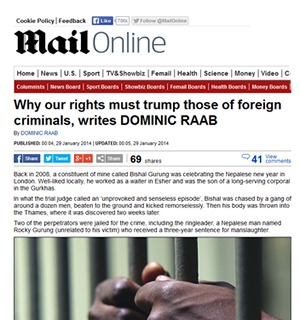 “Of the hundreds of successful human rights challenges each year, 89 per cent are solely based on Article 8.”

Those were the words of Conservative MP Dominic Raab MP in an article for yesterday’s Daily Mail.

This, Raab added, was why “any right-thinking person must see that this obscene abuse of human rights has to stop”.

He was referring to Article 8 of the Human Rights Act, which stipulates that the ‘right to respect for private and family life’ must be taken into account by the courts during any decision over a deportation.

Raab has tabled an amendment to the Immigration Bill that will, in his words,

“…at a stroke, cut out the Article 8 challenges. No ifs, no buts. It will rebalance the system in favour of the victim, and help restore public confidence.”

As mentioned, in justifying his amendment Raab has claimed that 89 per cent of successful human rights challenges to deportation are based on an Article 8 defence.

What’s more interesting is what Raab doesn’t tell you.

According to data collated from written parliamentary questions, in 2012, 1,884 criminals were deported. 902 of those lodged appeals, but only 29 per cent of those appeals were successful (262 in total). Of those, 151 relied on an Article 8 defence, which is 57.6 per cent (rather than 89 per cent) of all successful appeals.

As has also been pointed out to me, the total number of those successfully appealing on Article 8 grounds has fallen each of the last three years – the percentage of successful appeals is now at its lowest level since 2008, falling from 225 in 2010 to 151 in 2012.

In other words, Dominic Raab’s amendment to the Immigration Bill is based on, let’s just say, a strange interpretation of the data.