Only by challenging extremism in broad daylight can the cracks in extremist ideologies be shown for what they really are. 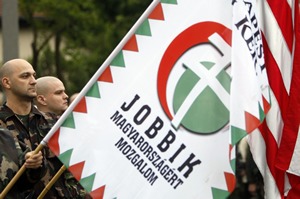 Last weekend, the Hungarian radical right party Jobbik (Movement for a Better Hungary) held an event in London in an attempt to rally support from London-based Hungarians in the coming national elections, to take place April 6.

The UK holds a large population of emigrated Hungarians – over 50,000 including upwards of 18,000 in London alone – whose support can prove crucial for marginalised parties like Jobbik, currently the third largest party in Hungary having won 16.67 per cent of the vote in the last national elections. Jobbik is viewed as an anti-Semitic and anti-Roma ultra-nationalist party.

The 35-year old party chairman Gábor Vona is a particularly controversial figurehead as the founder of the neo-fascist grassroots paramilitary group, the Hungarian Guard, in 2007. The Hungarian Guard was subsequently made illegal in 2009 due to the organization’s activities, which were deemed as going against human rights and the rights of minorities.

However, the group continues today under a myriad of different names.

Efforts from anti-fascist groups, supported by Labour MP Andrew Dismore, to ban Jobbik’s entrance into the UK the day before Holocaust Memorial Day included a 14,000 signature petition. Despite this, the UK home secretary Theresa May stood her ground, stating that the Jobbik event was lawful and to ban it would contradict democratic principles concerning the freedom of speech.

However unsavoury Jobbik’s views are, May was right to maintain her values in the face of considerable pressure.

Jobbik’s grand entrance into London was met by dozens of anti-fascist protestors, holding banners and declaring their distaste for the party’s xenophobic agenda. Jobbik ended up being corralled and cornered off by Metropolitan Police, stuck at Holborn station for over an hour.

Finally, Jobbik retreated to Hyde Park where a gathering of around 100 supporters resumed their intended rally. No violent incidents occurred and no arrests were made – infinitely less fuss compared to the furore that would have exploded had May bowed to the anti-fascist brigade.

For those who came out to challenge Jobbik’s xenophobic narrative there is much to learn from the continued power of peaceful protest and openly presenting counter-narratives. Supporters of Unite Against Fascism, members of the Jewish community and concerned London-based Hungarians successfully showed support against segregation and discrimination.

The traditionally strong facade of the radical right was made to look cowardly in comparison to a mere few dozen activists united in promoting equality.

Making the strong voice of equality heard was not achieved by banning the voice of inequality. Indeed there is a stronger message to convey by challenging extremism in an open dialogue and debate to allow for a healthy marketplace of ideas. A civil society response to extremism did what a legal response can never do – engage in the battle of ideas and win the hearts and minds of British society.

Banning and stifling extremist ideologies from the greater public has never eradicated extremism. However, cultivating democratic discourse, whether by social activism or civil debate, forces a broader view of the world and a greater understanding of perspectives.

Perhaps the Jobbik event in London did not turn already dedicated Jobbik supporters into moderate democrats, but it did force the UK, Hungary and Europe to openly question Jobbik’s dangerous presence in Europe.

Only by challenging extremism in broad daylight can the cracks in extremist ideologies be shown for what they really are: ideologies based on fear, false interpretations and misguided views of the world around us.

8 Responses to “However unsavoury Jobbik’s views are, Theresa May was right not to ban them”