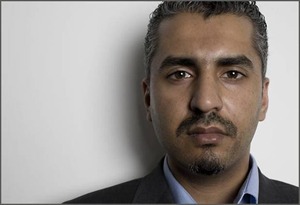 Victories in the battle to defend free speech and expression from Islamist thugs and bullies have been rare in the last few years. Unfortunately, intimidation and death threats do work and can create a climate of fear in which even the bravest free speech advocates can be forced to retreat.

It is for these reasons that Nick Clegg’s intervention into the recent controversy over an innocuous cartoon which involved Lib Dem candidate Maajid Nawaz should be savoured.

In response to a petition calling for the Lib Dems to drop Maajid Nawaz as their PPC for Hampstead and Kilburn after he tweeted a cartoon depicting Jesus and Muhammad greeting each other whilst stating that he did not find it offensive, Clegg said:

“We fundamentally believe in freedom of expression in an open, liberal and free society and therefore strongly defend Maajid’s right to express his views. Maajid was commenting on a recent BBC programme which covered this issue and wanted to make the point that as a Muslim he did not regard depiction of the Prophet Muhammad as being offensive.

“It is my understanding that Maajid has made it clear that he therefore tweeted in order to contribute to a live debate rather than out of any intention to deliberately offend, and that his tweet reflects his genuinely and sincerely held religious views.”

These are wise words from the party leader and, given the circumstances, highly appropriate. However, not all members of the Lib Dems have adopted Clegg’s position and defended liberalism.

In fact, it would be fair to say that the Lib Dems have an illiberal faction that has not only failed to defend free speech and the right to mock religions, but refused to condemn a fellow party member, Mohammad Shafiq, who is responsible for seeking to incite a lynch mob against Maajid Nawaz for his innocuous tweet.

“Im all for a mature ‘debate’ on any religion, but using a cartoon is unhelpful and trivial. This cartoon is part of a cartoon strip which depicts the Prophet Mohammed in bed with Jesus drinking beer. Clearly offensive to even the most moderate Muslims.”

Ece’s comments are worrying because they pander to the notion that mainstream society, including liberal Muslims, should tailor their speech in order to cater for Muslim sensitivities over the depiction of Muhammad.

In truth, those Muslims who are offended by such depictions and believe they have the right to dictate what others can and can’t say about their faith must get used to living in a free society where they are not given any special privileges.

Her analogy with the persecution of Jewish people in Europe during the height of the Nazi campaign against them is also deeply troubling and completely inaccurate in ways I don’t need to elaborate upon.

Ece also fails to condemn those behind a vicious and damaging campaign against Maajid Nawaz that appears to be led by Shafiq. This is in spite of Shafiq calling Maajid ‘Gustakh-e-Rasool’, which is a de-facto death sentence, and threatening to inform ‘Islamic countries’, which can only be interpreted as an attempt to whip up mass hysteria which, in the past, has resulted in violence and fatalities.

Clearly Mr Holloway is stuck in a 1960s post-civil rights US time warp in which ‘white man’ is the villain of the piece. I’m surprised he didn’t go further to use the term ‘House Muslim’.

Ece and Holloway are not only both members of the Lib Dems, they are also members of an organization called the ‘Ethnic Minorities Liberal Democrats’ (EMLD), which is chaired by Issan Ghazni. The EMLD have also issued a statement about the cartoon affair in which they state:

“Contrary to the impression given by a recent BBC broadcast, EMLD are not calling for Maajid Nawaz to be de-selected as a PPC for tweeting a cartoon of the Prophet Muhammed and Jesus. Mohammed Shafiq spoke to the BBC in his capacity as a Ramadan Foundation representative. Sadly it is all too common for the media to get the ‘hats’ of commentators and pundits confused, or to mischievously apply the wrong one.”

It seems due diligence is not an EMLD strong point, since Shafiq was introduced by the BBC as a representative of the EMLD rather than the Ramadhan Foundation, as the image below proves, even though the BBC got the name wrong. 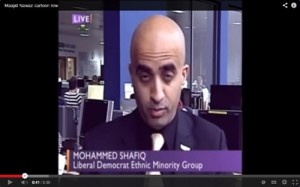 The EMLD statement goes on to state:

“Liberalism is more than the right to offend. That is a narrow, shallow, interpretation. With free speech and Liberalism comes the responsibility to respect, to understand, and to be tolerant of faiths, difference and all cultures. This includes respect for those who speak out when they are offended. PPCs should be especially aware of this and should know better than to offend large sections of the population, whatever point they seek to make……..

“Free speech does have its’ limits, however. For example, past comments from Lib Dem politicians that have been interpreted as anti-Semitic have led to strong sanctions against them. We believe in the Liberal values of equal treatment of all races, faiths and communities and, as such, believe that the perception amongst many Muslims that the negative public discourse has led to them being treated as ‘second class citizens’ must be urgently addressed by all Liberals.”

You just couldn’t make it up. Yes free speech should be practiced responsibly, but is it really irresponsible for a Muslim to state that they are not offended by an innocuous cartoon? Is expressing your lack of offensive over a cartoon depicting Jesus and Muhammad being intolerant of faiths and cultures? Can tweeting a picture of a historical figure belonging to a universal and evangelic faith like Islam, be compared to anti-Semitism?

And what does more to damage the image of Muslims and Islam – a moderate Muslims claiming he is not offended by a cartoon or a reactionary Muslim screaming blasphemy and inciting a lynch mob?

But it gets worse.

Lib Dem member Irfan Ahmed, who is an executive member of the Pendle branch of the Lib Dems, said:

“I believe as a liberal it is important to allow debate and healthy debate, but what I don’t believe in practicing is attack or the mockery of a Prophet of any religion. Religion alongside ethnicity must always be respected and not mocked or attacked with petty cartoons.

“I ask you to look back in recent history, can you remember when a Danish newspaper published a cartoon about the Prophet Muhammad? There was international uproar and a boycott of Danish products. By not suspending Maajid Nawaz and investigating this matter, does the party want voters to boycott the Lib Dems as they boycotted Danish products?”

Putting aside the very poor sentence construction, Irfan, as a liberal, appears to be threatening the Lib Dems with a nationwide boycott, in which Britain’s two million Muslims will desert the part en mass. Also, as a liberal, he seems unable to distinguish between insulting an entire ethnic group and tweeting a comment about an innocuous cartoon drawn by someone else.

Irfan’s preposterous comments should come as no surprise. In 2009 he was chastised by the party faithful for attacking the families of dead British soldiers and defended the practice of senior Asian men dictating how Asian women vote – see here.

Ironically, this whole episode has done a great deal of damage to the image of Muslims and, once again, that damage was done by those claiming to be representing and protecting the interests of Islam. The cowardice and moral bankruptcy that characterises many western liberals, and their Islamist counterparts, feeds attempts by anti-Muslim elements to portray all Muslims as inherently reactionary and incapable of co-existing in liberal and secular societies.

15 Responses to “The Illiberal Democrats”