The government should provide a non-profit, partially subsidised alternative alongside supermarkets. 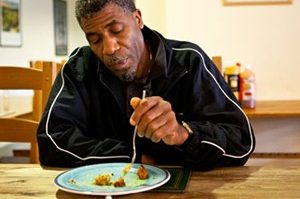 Many were shocked to hear that a Yorkshire school has started collecting food for a food bank after discovering that a pupil hadn’t eaten for an entire weekend. Yet food poverty is becoming increasingly common in the UK, and it’s time the government took responsibility for this crisis.

Food poverty is associated with family breakdown, mental health problems and crime and the only alternative, food banks, are humiliating and degrading.

Yet despite this, the government is refusing to act, instead resorting to insulting the poor and vulnerable for the situation they find themselves in.

Some commentators have pointed to welfare cuts as a cause for the food poverty crisis, but there are alternative solutions other than reversing benefit cuts.

It’s clear that this system is failing families; within the last three years, the number of people depending on food banks has increased from 61,000 to 346,000, whilst supermarkets maintain large profits.

Despite this, the suggestion of government intervention in the food industry is often met with horror, as dark images of 1940s style rationing come to mind.

But intervention needn’t be as drastic as in the past. The government could simply provide a non-profit, partially subsidised alternative offered alongside supermarkets, with an emphasis on providing cheap, essential food to consumers, rather than the pursuit of profit.

Neo-liberals are likely to argue against this on the grounds of free-markets, but why have we even accepted the idea that the food industry needs to be subject to profit and competition?

Before 1948, healthcare in Britain operated in the same context; it was effectively a free market where provision was met by either private doctors or charity. Yet the country realised that healthcare was a fundamental right, and therefore tasked itself with operating a service based on supplying healthcare to all, replacing an emphasis on profit with an emphasis on care.

The same principles can be applied to food, a necessity which is as essential as healthcare.

A government alternative to food retailers may seem like a reactionary response to the needs of a minority. Yet a democratically accountable, non-profit system provides great opportunities not only to reduce the cost of living, but to maintain ethical responsibilities. Worries about unhealthy eating and an obesity epidemic could be met by ensuring that products satisfied certain guidelines.

A fair commitment to producers, who are struggling in both the UK and developing countries could also be ensured.

Even staff could benefit, from a commitment to a living wage – something that most profit-driven companies are refusing to do. By creating a democratic food retailer which wasn’t concerned exclusively with profit, it would be possible to create an organisation focused entirely on supporting both producers, staff and consumers.

Public attitudes are wary of government investment, yet they shouldn’t be. The Conservatives have managed to use the rhetoric of the damaging nature of government spending in order to blame a single nation’s fiscal policy for an entire global economic crisis – a dubious claim at best. But the government must not neglect its responsibilities to meet the fundamental rights of the people it represents.

In 1948, ministers took a risk, and in doing so created one of the most well-regarded organisations in the world; a health service that is now proudly cherished as a defining part of British culture. The NHS was created, according its founder Aneurin Bevan, on the grounds that “despite financial and economic anxieties, the most civilised thing in the world” is to “put the welfare of the sick in front of every other consideration”.

A civilised society would also provide food for those without, and so the government must respond to this crisis accordingly.

4 Responses to “The government must take responsibility on food poverty”