We were invited to argue the case for the proposition on The Big Questions last Sunday. 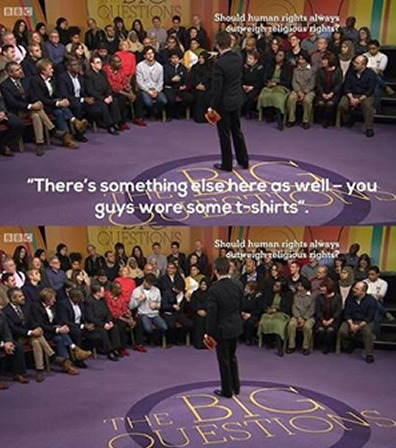 Should human rights outweigh religious rights? We were invited to argue the case for the proposition on The Big Questions last Sunday. As novices to television, we spent a week refining and rehearsing our arguments for the big day.

In the event, we needn’t have bothered, because the defining irony of secularism is that there is no better advertisement for it than the uninterrupted ramblings of a group of religious monomaniacs.

The Reverend Lynda Rose claimed that Britain was “very close to seeing active suppression of Christians which will lead to persecution …we’ve seen this happen before in Nazi Germany”.

Her proposed inoculation for the emergence of the Fourth Reich in Canterbury involved giving Christians the right to refuse gay couples entry to their B&B’s: it wasn’t born of homophobia, she assured us, but because her religion deplored cohabiting unmarried couples (in an entirely unrelated aside, the Reverend campaigned tirelessly against last year’s Marriage [Same Sex Couples] Bill).

So, the presenter Nicky Campbell asked her, would she support the right of Muslims and Jews to not sell alcohol and pork, as was demanded recently at Marks & Spencer? Alas. “If you are going to have those problems you should not work on the tills” , she responded.

Meanwhile, her co-religionist, the Reverend Betty King, whose heavy workload of exorcisms perhaps clouds her capacity for consistent reasoning, argued cheerfully for her right to manifest her religious beliefs but said she would “applaud” a ban on the niqab.

Now, there is a genuine progressive case against the niqab, but as the protagonists of the Jesus and Mo kerfuffle it was hardly our place to advocate dress codes; so, in a spirit of something approaching solidarity, we conveyed this sentiment to the panel’s two Islamist apologists (dressed in a hijab and a niqab) and enquired whether they would reciprocate by supporting our right to wear the t-shirts.

“No! Why would you want to offend religious faith?”, they cried, concluding the episode’s advisory about the consequences of entrusting your freedoms to religious monomaniacs.

As slippery as these peddlers of exclusive rights are the fair-weather rights crusaders. David Lammy, the Labour MP for Tottenham, had movingly attacked the Rev. King’s homophobia, likening the B&B exclusion to the signs of ‘No blacks, no Irish, no dogs’ that greeted his immigrant father in the 1950s. Shortly after that, he entreated us to  “respect” those defending gender segregation at public universities in the UK.

When Mr. Lammy was pressed on whether the right to freedom of expression included the right to offend, there was a pregnant pause (during which he, presumably, recalculated his electoral majority) before he replied with “yes, but just because you have the right to offend doesn’t mean you should go on to offend”, his answer overstaying its welcome by precisely seventeen words.

We find that his attitude embodies the exasperating current fixation with according unearned ‘respect’ to people’s beliefs, in the pursuit of a mythical Eden of harmony that would appear if only we stopped offending each other. To us, this ‘respect’ seems to serve only to prop up unworthy ideas, and is intrinsically doomed, since those who claim it are not inclined to return the gesture.

Mr. Lammy cannot summon the will to defend unequivocally the rights of Muslim women like Lejla Kuric, Yasmin Alibhai-Brown, Sara Khan, Tehmina Kazi or Sheema Khan, who oppose segregation in principle and in practice, because he has already swallowed the narrative of homogeneity, as evidenced by his proud claim that he doesn’t even offer to shake hands with the women at local synagogues “out of respect”.

Worse still, this ‘respect’ is offered most generously to those who scorn most fervently the mores of our shared society.

Hence, Mr. Lammy’s comments deferred not to Maajid Nawaz, a Muslim who represents the finest synthesis of British Islam and does more for the rights and freedoms of Muslims than anyone else in that studio last Sunday, but to the berobed Islamists striving to be most visibly and vocally parochial, who would see Muslim women remain shackled to the yoke of the ‘community’, and who think their disdain for the rights of others entitles their beliefs to greater respect.

These religious apologists provided, unassisted, the episode’s most convincing illustration of why the primacy of religious belief over individual rights militates against everything essential to a civilised society. “I may not agree with what you have to say”, they said, “and I will defend to the death my right to stop you saying it.”

We just got the popcorn and watched.