Refusing to do away with loans and pussyfooting around business contributions are not the ingredients for a winning Higher Education system. 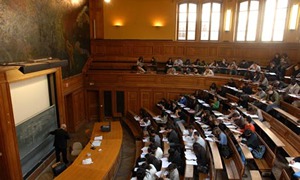 It’s an open secret that the higher education (HE) funding system in England is broken, and that the coalition’s meddling in the area has failed to fix the problem.

John Denham MP, in a speech to the Royal Society of Arts last Thursday, brought some shocking facts on the existing arrangement to light, not least that the state spends £6 on student debt cancellation for every £1 it spends on teaching.

He also claimed that the percentage of students destined never to repay their loan could soon hit 50 per cent under the coalition’s watch, up from 28 per cent under Labour.

But pointing out problems is easy. Finding solutions is more difficult.

Neither Labour nor the coalition has truly grasped the nettle of university funding. The coalition may have hiked fees and withdrawn state provision, but this constituted a change in emphasis, rather than of approach, to funding. Labour’s only policy commitment (and one that hasn’t resurfaced for a long time to boot) is an uninspiring pledge to lower fees to £6,000 a year.

Now, at least one member of the political establishment is proposing a bold new strategy on university funding. Denham, a former universities minister, set out a fresh vision on funding that has at its heart a renewed public commitment to tuition costs.

So how would this system work?

First, Denham wants to replace the bulk of student loans with direct state subsidies to teaching. Estimates reveal that the government will lose at least 30p on every £1 it lends to students, since repayment is linked to income and outstanding debts are written off after 30 years. So the logic goes if students pay less directly, the state would pay less in debt cancellation – known as the Resource Account Budgeting (RAB) charge – and have more to plough back into teaching.

Denham’s replacement to the £9,000-a-year cap would be to give every English student a flat-rate entitlement of £14,800 towards their tuition costs for the duration of their studies. The difference between this entitlement and the cost of the course would then be covered by a top-up loan. Under his analysis this would cut the total fee cost of the average three-year degree to less than £10,000.

His next target was course structure and duration. He made the case for condensing 30 per cent of three-year degree courses into intensive two-year programmes, for a cost saving of 20 per cent per course, and recommends employers stump up the fees for a further 50,000 vocationally orientated courses. He also suggested more students study from home to bring down living costs for students.

Denham’s plans are ambitious, but lack the fine detail needed to provide the foundations for a new system.

Lowering tuition fees would be welcome, but abolishing student loans altogether would be better. £10,000 is still a great deal to pay back at the start of your career.

Curiously, the most popular alternative to a loan system – a graduate tax – was conspicuously absent from Denham’s proposal, meriting only a paragraph in his closing remarks. It would be a shame if Labour dumped this policy.

A progressive graduate tax where university leavers pay in proportion to their earnings for the duration of their working lives would avoid the costs associated with loan defaults and relieve students from the burden of debt, which may deter young people from going into HE in the first place.Tax proceeds could then be fairly apportioned to universities on the basis of need, rather than the current system where fee income goes solely to the institution a student attended.

On course structure, Denham admitted that savings would only be possible on the scale imagined if universities worked together to bring in two-year programmes and push for more students to study from home. He also said nothing on the threat that this could usher in a two-tier system: with students from affluent backgrounds enjoying the full fruits of campus life over a three-year period, while those from poorer backgrounds pay to be students-in-exile.

His idea of channelling a larger amount of public funding into teaching would also lead to some unwelcome cutbacks to other elements of HE spend.

For example, under Denham’s proposal the percentage of taxpayer funds apportioned to widening participation (WP) – the programme designed to aid students from disadvantaged backgrounds into tertiary education – would be halved from 4 per cent to 2 per cent. It would also spell the end of maintenance grants to students.

Finally, while encouraging greater business collaboration in funding and designing degrees is to be applauded, this will be easier for wealthier, urban universities than poorer, rural ones. A simpler way to ensure business pays its fair share is to levy a small HE premium on companies through corporation tax.

In the 2013 Budget, the chancellor slashed corporation tax rate to 20 per cent for fiscal year 2015, a move predicted to lose the exchequer £800 million annually from 2016 onwards, about the same amount public funding for universities was cut in 2013.

Selling tax hikes is never easy, but politicians should remember that universities are economic powerhouses in their own right and deserve taxpayer support. In fact, the HEFC estimates UK universities contributed £3.4 billion to the economy in 2011-2012.

Also, state support for universities has already fallen to a 100-year low, making up just 15 per cent of a university’s income under the coalition, according to report published by the University and College Union (UCU) in 2012. There is a strong case to be made for taxpayer contributions to increase.

Denham admitted his current plans were based on “crude assumptions” and should not be considered the finished package. But overlooking the quality of the student experience, refusing to do away with loans, and pussyfooting around business contributions, are not the ingredients for a winning HE funding system.

As we near the end of the 2010 parliamentary term, Labour’s plans remain some way off a first class standard.