There are several problems with Galloway's entry into the debate surrounding Maajid Nawaz. 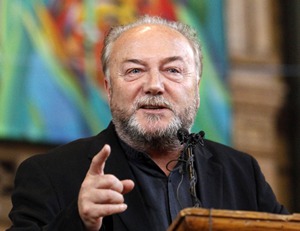 The recent debate over Maajid Nawaz’s tweet depicting Jesus and Mohammed is a hot one. The right to be offended versus respect for the sensitivities of certain communities is as old as time itself, and wading into it requires careful consideration of the facts and pause for reflection.

These are things you don’t get with George Galloway.

The leader of the Respect Party has slurred Nawaz, calling him “rancid” and promising to invite applications for Respect candidates in the area of Hampstead and Kilburn – where Nawaz is standing for the Liberal Democrats.

The problem here is not that Galloway has (hamfistedly) entered the debate; nor that Respect will stand a candidate. The problem is the reason he has given for doing so.

“No Muslim”, Galloway added, “will ever vote for the Liberal Democrats anywhere ever unless they ditch the provocateur Maajid Nawaz”

Now, we’ve been in this extraordinary position before. This is not the first time Galloway has appointed himself as the authentic voice for all Muslims everywhere.

Many will remember the personal letter he sent around households, addressing voters of the Muslim faith and Pakistani heritage in Bradford West in 2012, in which he said: “I, George Galloway, do not drink alcohol and never have. Ask yourself if you believe the other candidate in this election can say that truthfully.”

In a concluding phrase, that led to the later revelation that Galloway had actually converted from Catholicism to Islam, he said: “God KNOWS who is a Muslim. And he KNOWS who is not. Instinctively, so do you”.

There are two glaring problems with Galloway’s recent entry into the debate around Nawaz. Firstly that while appointing himself Muslim spokesperson No.1 he is sidelining pro-free speech Islamic voices and implying that Islam shares a single voice on all issues; and second that he has extraordinary access to future voting trends of Muslims countrywide.

With the first, Galloway’s motives are clearly just deluded. Depictions of the Prophet Mohammed may well be the subject of some contention; but the wider implication of Galloway’s intervention are that: a) Muslims can never support free speech, and b) they must be treated with kid gloves.

The former is untrue, the latter has Galloway patronising the very people who he supposedly represents.

The burden of proof is really upon Galloway to prove that no Muslim will ever vote a Liberal Democrat again (there are far better reasons than tweets) – and I would suggest he has no proof to say this. But another thought should have entered Galloway’s head.

Supposing he is correct, and no Muslim supports, in principle, the right to be offended in a society that is free: is this not something worthy of challenge? After all, what Nawaz tweeted was not simply a depiction of Jesus and Mo, but an affront to establishment attempts to treat Muslim people with kid gloves, reduce them to non-thinking children, and regulate like a parent what they can and can’t hear.

Is any of that the sort of society you wish to live in?

Free speech is something worth defending, and is afforded defense in the British legal system. For any doubt on Islamic law and the laws of any given land, Professor Shaheen Ali of Warwick University once pointed out that: “Britain affords a legal system to all its habitants and is therefore congruent with Islam and social justice”.

There is an immediate problem with Galloway pretending to be the voice of Islam – itself patronising and insensitive. Here is a man who supports Syrian President Assad, who makes a point of killing Muslims in his own country, and who denies that gays and lesbians in Iran, some of whom will be Muslim, are persecuted.

But the real problem is that Galloway fails to challenge erroneous views on freedom and human rights that he believes are universal among his supporters. That’s cowardice.

48 Responses to “Is George Galloway really the authentic voice of all Muslims everywhere?”