Vivane Reding, vice-president of the European commission, stated in a web chat last night that in the UK there is a perception of an "invasion of foreigners" coming to the UK to "steal jobs". 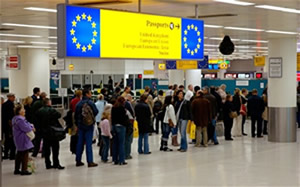 Vivane Reding, vice-president of the European commission, stated in a web chat last night that in the UK there is a perception of an “invasion of foreigners” coming to the UK to “steal jobs”.

“this supposed invasion of foreigners coming to the UK and stealing the jobs and stealing the social security and the health money……The fact and figures, and we all know this, show it is simply not true….I am mostly frustrated about the political leaders because what is leadership if you just try with populistic movements and populistic speech to gain votes?”

Indeed, if you were to take an overview of the UK’s press today then it would appear that all of our economic woes are due to ‘benefit scroungers’ and immigrants.

Ms Reading is right to point out that we have fallen into scapegoating immigrants, whipped up by populists such as Nigel Farage and the tabloids.

A quick look at some of the myths behind immigration illustrates as much:

‘They are taking our jobs’

This is a cry that has rung through the ages, be it the 1960s, 70s, 80s, 90s and 00s. The historical data is undebatable that immigration helps creates jobs; the idea that employment is a zero-sum game of continual limited jobs either for immigrants or UK born workers is simply wrong.

An example of this is that in 2012 over 66 per cent of European immigration came from core EU community countries like Germany and France, providing skilled staff that are more “likely to be in higher managerial or professional occupations and they also earn 7.6 per cent (£2,035) on average more than UK workers”

In other words, the high skilled workers we need to be competitive in the world market.

To lose these young, motivated workers would be an economic disaster. As The Centre of Business Research states:

“Tighter immigration controls will result in a loss of 2 per cent from GDP by 2050, £60billion in real terms. And without migrants from the EU helping to off-set the UK’s ageing population, government borrowing would be 0.5% higher.”

We can also see the longitudinal effects of this immigration. Again, the evidence is positive: a 30-year study found that although migrants often experienced downward mobility to begin with:

“Caribbean, Black African, Indian and Chinese young people were more likely to have found professional or managerial jobs than their white, non-migrant counterparts….Upward mobility among children from minority ethnic groups was due to their educational achievements. This suggested that migrant parents often encouraged and motivated their children to gain good qualifications”.

‘They are all on benefits’

This is counterfactual to the above evidence on jobs and not supported by data from Ian Duncan Smith’s own Department of Work and Pensions (DWP), which says:

Let’s put this another way and look at ourselves through the eyes of the immigrant. If we in the UK behaved as non-UK nationals do, the DWP working payments in benefits would be cut by over half – by over £30 billion. Over the long-term migrants are also helping to pay for our ageing population and pensions (by far the largest DWP cost).

‘Education and Health Care is at breaking point’

There is no denying that communities which have had an increase in immigration are under stress, but to blame this on the immigrants is to miss the point. Those who have come to Britain are working and paying taxes, therefore it is the government’s job to provide the extra funding to the individual schools and hospitals in that area.

This failure of government policy was highlighted by the funding (£1.5 billion) being diverted to Academy Schools “where extra places weren’t needed“.

‘Our communities are breaking down’

Over five times as many people (38 per cent to 7 per cent) thought the UK generally had a problem but not their own community. This shows the effect the media has on those in areas that have very little immigration but who see it as a national problem.

Never has the language of our politicians been so one sided.

19 Responses to “European commissioner is right: we can not let populism win ahead of facts on immigration”