Despite today's welcome news on falling unemployment, pay and productivity are stagnating. 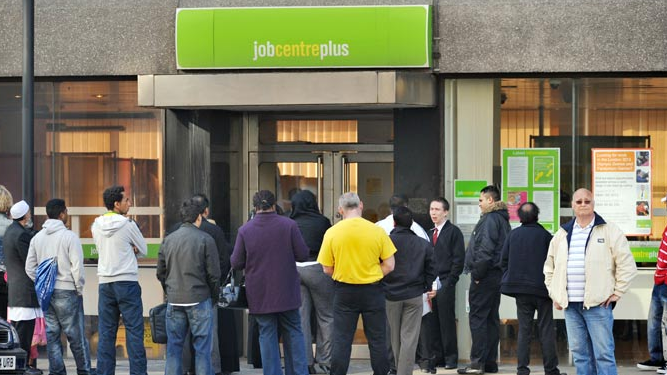 When he thought about the monthly employment figures, due just a couple of hours before Prime Minister’s questions, David Cameron probably hoped for a set of figures that looked just like what he actually got.

In addition to the news that the number of people in employment has topped thirty million for the first time, today’s numbers include the news that:

My favourite employment statistic, the ratio of unemployed people to job vacancies, came down from 4.6 to 4.3. That figure has been coming down since late 2011, though it still has some way to recover to pre-recession levels: 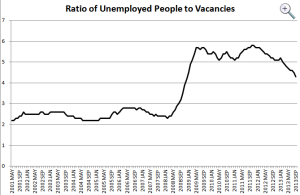 A number of people have pointed out that there could be a sting in the tail to all this. The unemployment rate has been heading downwards throughout 2013. It now looks very likely indeed that, early in 2014, the unemployment rate will pass below the 7.0 per cent figure at which the Bank of England will “reconsider” interest rates.

Employment is rising, but the living standards crisis has hardly been affected: millions of people will find any increase in their mortgages difficult.

This is a real concern, but we should not bolster the inflation hawks by assuming that unemployment falling below 7 per cent will automatically be followed by an interest rate rise. The Bank now looks to have been a bit premature in using the 7 per cent marker (which they originally thought would not be passed till 2016) but Mark Carney has been careful to emphasise the fact that it is “a threshold not a trigger”.

With inflation low and not showing much sign of taking off, there is a strong case for welcoming falling unemployment and leaving interest rates low.

But that debate is for the future. As in previous months, the bleak news now is about pay. Average weekly earnings (regular pay) in October were just 0.8 per cent higher than they had been 12 months previously.

Yet again, earnings have failed to keep pace with inflation, even if we use the government’s preferred measure, the Consumer Price Index: 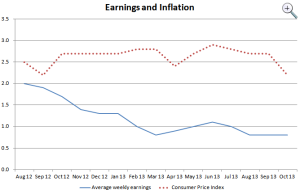 Alongside pay, productivity is stagnating too. The chart below shows two common measures of productivity, output per worker and output per hour, both indexed to the average figure for 2010. I’ve used the figures going back to 1998 to give a sense of what normal looks like.

The latest productivity figures show a small improvement (that’s the small tick upwards you can see at the right of the chart) but the important story here is that productivity is stagnating: 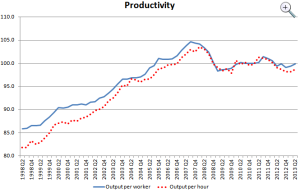 Conventional economics, which links earnings to productivity, would not be surprised that the two are following similar trends. It may not be surprising, but it is bad news.

Obviously, badly-paid jobs, with low productivity, are preferable to high unemployment and if pay and productivity slipped temporarily as we came out of recession this would be less of a worry. But this is becoming more of a permanent feature of the economy.

There are several explanations for why this might be happening. One is that we are seeing a shift in economic activity to lower paid, less productive industries; another is that employers are taking advantage of low pay to substitute labour for capital – which would help explain low levels of investment.

It’s perfectly plausible that both are happening at the same time. But they both point towards a serious problem with the fundamentals of the economy: this goes further than austerity.

2 Responses to “Despite welcome news on unemployment, pay and productivity are stagnating”