The re-balancing of the economy which Osborne promised has been all but abandoned. 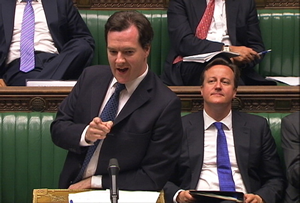 The dust is settling on chancellor Osborne’s Autumn Statement. The initial reaction from the right-wing media was that Boy George had set a course for an election victory.

The chancellor himself played up the hype with statements that the economy was on course for sustained growth, good jobs would be created (to reaffirm that a quick photo opportunity was made to JCB where new jobs were being announced – which had been signaled months ago) and that all the pain would be worth it.

It is clear the mantra is being stuck to. Lynton Crosby will no doubt have reminded him to say it often enough and hope people will believe it.

However, a number of things are clear: Austerity is here to stay and it will get tougher; living standards will continue to fall despite upwards revisions to GDP growth; average earnings growth forecasts have been revised down for next year and until 2017 (so the cost of living crisis will get worse); and welfare benefits will be hit.

The Tories will also probably try to introduce policies they never dreamed that they could get away with in the past – all in the name of ‘aiding the recovery’.

Also clear is that the re-balancing of the economy which Osborne said would be a priority –  by strengthening our manufacturing base – has all but been abandoned in favour of growth through credit, the spending of savings and another housing bubble.

The warnings of failing to establish a strong manufacturing base are being ignored. Lord Heseltine’s report on developing a strong industrial policy ‘No Stone Unturned’ appears to remain on a Westminster shelf somewhere.

The chancellor failed to mention the word ‘manufacturing’ once in his entire statement and only mentioned ‘industry’ when referring to the insurance sector.

He also failed to address concerns that the heavy energy-use sectors – which employers and unions have campaigned on, namely high energy costs in steel, paper, ceramics, glass etc. This means these sectors will continue to be disadvantaged against other European countries – for example UK energy prices will remain 50 per cent higher than Germany and France.

And while the commitment to provide funding for around 20,000 apprenticeships and to increase the number of engineering graduates is welcome, this is tinkering with the system. It also remains to be seen how many companies will respond to the initiative of cutting NICs for companies who take on under 21 year olds.

And the chancellor failed to tackle business investment, which remains 24 per cent below 2008 levels.

Overall the Autumn Statement failed to address the underlying need to take concrete steps to re-balance the economy. It was another short-term mixture of halfhearted measures, fingers crossed and hope for the best.

Meanwhile the cost of living escalates, workers face pay freezes, but for the City it is ‘back to the future’. Meanwhile the statement was another missed opportunity for the chancellor to demonstrate that this is a manufacturing-led economic recovery.

Its fine that Labour responded by pointing out that the Statement was all ‘smoke and mirrors’, but Ed Miliband and Ed Balls need to hammer home the need for sustainable manufacturing led growth strategy.

Unite has set out its proposals for re-balancing the economy to develop a strong manufacturing base in our document ‘Made In Britain’, which can be downloaded from the Unite website.