In order to fit events into its supposedly 'anti-imperialist' worldview in which no one claiming to be opposed to the United States can do any wrong, StWC is willing to indulge fantastical conspiracy theories. 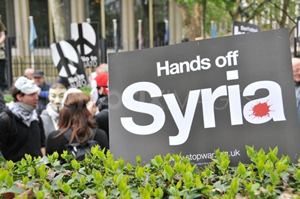 At Stop the War Coalition’s conference last Saturday we waited anxiously for the ‘Syrian Conflict in Context’ session to begin. Disappointingly, there wasn’t a single Syrian among the speakers and later one of my companions noted that it was the first time he had sat through an hour of presentations on Syria without the word ‘Assad’ being mentioned.

First up was former Guardian foreign correspondent Jonathan Steele, who told the audience that he would have been very happy to have shared a platform with Mother Agnes.

This is the same Mother Agnes who claims that the videos of the chemical attacks on the Damascus suburbs were faked, that the children in the videos were in fact anaesthetised, and were kidnapped Alawites transported across the country for the purpose. The same Mother Agnes who wants to exhume the bodies of dead children to test her bizarre theories.

Steele informed the audience that the greatest number of victims of the conflict were not civilians but regime soldiers; “sitting ducks” at checkpoints for opposition forces. The civilians killed in regime airstrikes the previous day in Aleppo didn’t seem to factor into his equation; nor the victims of the massacres that the regime and its militias commit on a regular basis, such those in Houla, Banias and, most recently, Al-Nabk, where men, women, and children had their throats cut with knives.

The 300 people killed in a single airstrike as they queued outside a bakery in Hilfaya on Christmas Eve last year didn’t qualify for a mention either.

Steele draws his statistics from the Syrian Observatory for Human Rights, a small organisation based in Coventry. If he bothered to check the work of the Violations Documentation Centre, which provides details on every recorded death and is based on the ground in Syria, he would have seen that civilian casualties far outweigh those of the regime.

According to Steele there were no “white hats and black hats” in Syria. He asserted that “foreign and jihadi fundamentalist elements were getting stronger and stronger” within the opposition, but made no mention of the “foreign elements” on the regime side – Hezbollah, the Iranian Revolutionary Guards, the Iraqi Abul Fadl Abbas Brigade; nor of the military assistance from Russia, without which the regime would have collapsed long ago.

There was, however, one piece of “tremendously good news” from the whole situation – that by denying David Cameron the right to get involved in Syria, public opinion had actually “stopped a war”.

Six minutes into his speech, Steele’s divorce from reality had become complete. Never mind the dozens of people dying every day in airstrikes, artillery bombardments and massacres (500 civilians killed since the Conference), never mind the millions of refugees facing cold and hunger this winter, the war has been stopped. In the case of Syria, it seems war really is peace.

Steele’s speech set the tone for those who followed.

Sami Ramadani, a London-based Iraqi academic, attributed the entire conflict to a US plot hatched in 2001. The peaceful protesters who had first come out in March 2011 only to be mown down by the security forces were forgotten.

He not only failed to voice any criticism of the regime but went on to praise Syria’s “exemplary” record on women’s rights – presumably including the rights of the pregnant women shot in their wombs as part of a gruesome game by regime snipers, as British surgeon Dr David Nott revealed to the world.

The last speaker, StWC official and Palestinian solidarity activist Kevin Ovenden, had very little to say about Syria, except to reiterate that what was happening was part of an imperialist plot. Apparently no one has told him that Bashar al-Assad has killed more Palestinians this year and last than Israel has.

All in all, this conference was a sad statement of what the Stop the War Coalition has become. In order to fit events into its supposedly ‘anti-imperialist’ worldview in which no one claiming to be opposed to the United States can do any wrong, StWC is willing to twist facts beyond recognition, and indulge fantastical conspiracy theories.

What we saw at the conference was truly the anti-imperialism of fools.

7 Responses to “Stop the War conference: a one-eyed version of events in Syria”