My message to these people, if you are reading this, is that you will never silence me. 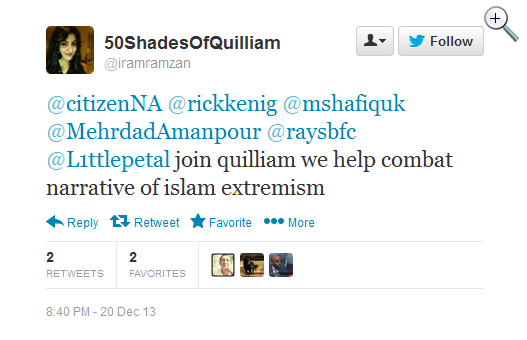 There are many great things about Twitter. For one, I’ve gotten to interact with people who I would never have been able to otherwise.

The downside, however, is the vile abuse one can be on the receiving end of from trolls. You know the type: nameless, faceless keyboard warriors who resort to name-calling and insults behind the safety of a computer screen.

About a month ago, I experienced my first interaction with trolls. One made a bogus account of me with a bio stating that I like to “drink alcohol, eat pork and sleep around”. I was also described as a “Quilliam stooge”, despite the fact that I don’t work for the Quilliam Foundation. But hey, why allow facts to get in the way?

I did, however, note something sinister and worrying behind the whole thing, aside from the atrocious spelling.

I am the latest in a bunch of women, specifically Muslim women, who have come under attack from a group of misogynist men. Their aim is supposedly to combat Islamophobia yet ironically their appalling behaviour is unIslamic and actually fuels anti-Muslim sentiment.

It’s rather funny how our ‘Muslimness’ is questioned to destroy our credibility. Accuse a Muslim person of drinking alcohol or eating pork and you have instantly ruined their reputation. And if you’re a woman, well, that’s ten times worse. The combination of being an ex-Muslim (which I am not by the way) and a ‘whore’ is lethal.

When Lejla Kuric, a Manchester-based artist, wrote an article on her meeting with Tommy Robinson, she was accused of being ‘Islamophobic‘, despite the fact that she is a Muslim. My theory is because she does not ‘look Muslim’ i.e. she is white and does not wear a headscarf she is an easy target.

Sara Khan, of Inspire, is regularly called a ‘government stooge’ and all the usual stupidity,  including people spreading rumours that she drinks alcohol – she doesn’t, but why should it matter?

“I’ve been called an ex-Muslim, that I work with or get into bed with zionists and Islamophobes, that I’m creating Islamophobia for addressing gender injustice within Muslim communities etc. None of this surprises me in one sense because I’ve spent 20 years working within Muslim communities and I know the score. I know that if you speak out as a Muslim woman you need a thick skin and you need to be prepared for a big backlash.”

Of course, men, too, come under attack. Maajid Nawaz of the Quilliam Foundation is constantly hounded, even by moderate Muslims. But when you are a woman, it is easier to be attacked. Men are not labelled as whores who sleep around. That delightful label is reserved for us females alone.

More worrying is if you look through their tweets, they are followed and re-tweeted by even moderate Muslims – they seem to unite against anyone who is ostensibly liberal, even if it means to side with a troll online.

Takes Mohammed Shafique, of the Ramadan Foundation. Despite being told repeatedly of the bogus account, he continues to interact with such troll as they praise him constantly – and they say flattery gets you nowhere. 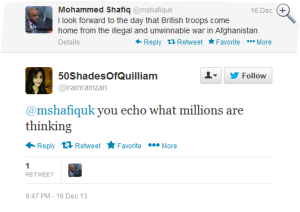 Catherine Heseltine of MPAC UK also confronted and began to harass Sara Khan after a troll who goes by the name ‘Barry Winner1’ asked her to intervene . She knew nothing of Sara’s stance on gender segregation at universities, yet felt more inclined to believe the words of a faceless troll on Twitter. Sara resorted to protecting her account for a while, shortly after facing much abuse on her stance against segregation.

Lejla certainly believes that there is a problem with misogyny directed against women online, and it is something that has been highlighted in the media more recently.

“Muslim women who speak for women rights and against gender inequality within their own community or express political or theological dissent are ‘slut-shamed’ by some Muslim man who do not approve of their opinions. Our sexual morality is questioned and we are deemed ‘sluts’ and ‘whores’ as a way of silencing us.”

Like me, she is labelled a “Quilliam whore”, ugly, and other vile insults, especially after she writes an article. Does she receive any assistance or help from anyone or other Muslims? “Sometimes from Muslim women, never from Muslim men, not once,” she says.

My message to these people, if you are reading this, is that you will never silence me. I have an opinion, a mind and a voice and I will be damned if I am going to let cowards hiding behind their computer screens scare and bully me into silence and submission.

As long as there are issues in this country that we need to tackle, I will be there, ready to speak out. And if that means being labelled a whore or stooge, then so be it.