By European standards Britain's benefits system is far from generous. 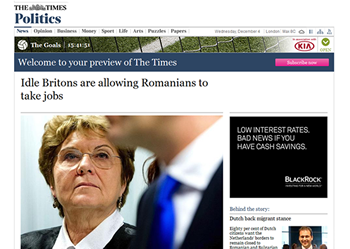 The headline was drawn from comments made by Romania’s labour minister, who appeared to single out Britain’s supposedly generous welfare system as resulting in a larthargic British workforce.

That the Times should run with this as a front page story is testament to just how short some people’s memories are. With all due respect to the labour minister of Romania, she is also not perhaps the best person to comment on the generosity of the British welfare system – unless she really has enough time on her hands to study another country’s welfare system.

In fact, she couldn’t be further from the truth.

Just last month a study by Edinburgh University showed that benefits do not make people lazy. The Europewide study, which was carried out in 28 countries, found that paying high levels of benefits to the unemployed did not result in them becoming lazy or lacking motivation to find a job.

Crucially, the study concluded that motivation levels of those without work are more likely to be affected by the way society views them.

As Dr Jan Eichhorn who wrote the report put it:

“Those who claim that greater unemployment benefits lead to less motivation for people to seek employment should think again – for most people, it is not the degree of state provisions that determines how they personally feel about the experience of being unemployed.”

As for claims about Britain’s overgenerous welfare state, compared to other European countries Britain’s welfare state isn’t really that generous at all. Take a look at the graph below (click to zoom in). 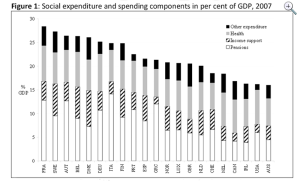 The study, carried out by the Economic and Social Research Council’s Centre for Population Change last year, found that the UK had below average levels of welfare spending among developed nations.

So no, by European standards Britain’s benefits system is far from generous.

10 Responses to “Is the UK benefit system really too generous?”