The Quiet Man is turning up the volume. We wish he wouldn't. 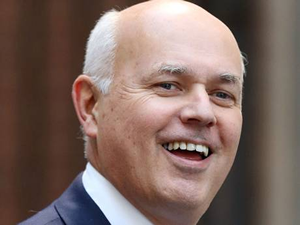 IDS has an op-ed in the Times (£) today in which he promises to take on the people who wish to come to Britain “simply because of our benefits”.

“Freedom of movement must be about work – it was never meant to assist benefit tourism,” the tough-cum-quiet man writes.

It’s fairly clear what Mr Duncan Smith and the Tories are trying to do here. In talking up the problem of benefit tourism, the Conservatives are trying to outflank UKIP from the right. Because the government is relatively restricted as to what it can do to control EU migration to Britain – freedom of movement and all that – the Tory party likes to make out that benefit tourism is a significant problem.

That way it can pretend to be doing something – anything – about immigration.

In reality, however, in singling out so-called benefit tourism IDS may as well be wasting his breath, for the number of people who travel to the UK to claim benefits is statistically insignificant.

This graph from Fullfact demonstrates a similar trend right across the board. 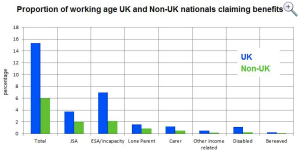 In every category UK nationals are more likely to claim benefits than foreign migrants.

“Of the 2 million net migrants to the UK from the eight eastern European countries that joined the EU in 2004, just 13,000 people have claimed jobseeker’s allowance (JSA). This figure was not disputed by No 10.” The Guardian, March 26 2013

It just isn’t that easy to be a benefit tourist. Something called the habitual residence test, which was introduced in 1994 by John Major’s government, means that before being allowed to claim any benefits in the UK immigrants are interviewed about their reasons for entering the country, how long they have been here, as well as their work status and history.

As a rule a person would need to have been in Britain for at least one to three months before they are able to claim any kind of benefit.

There is always the possibility that someone could come to the UK, spend all their money during the first month or so before parking themselves on benefits. However considering the government’s rhetoric around welfare reform – that it is ‘getting tough’ with those whose ‘curtains are still drawn at midday’ – this seems unlikely. If British nationals can no longer ‘languish’ on benefits, where is the evidence to suggest that foreign nationals will find it any easier to do so?

In sum, today’s op-ed by IDS is pure hot air. The Quiet Man is turning up the volume. We wish he wouldn’t.