The Tories have clearly not learned the lesson of the last two decades. 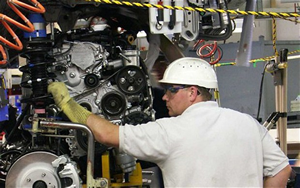 Chancellor George Osborne’s smirk turned to a grimace last week when he received a stark warning that the UK’s ‘economic boom’ is being built on shaky foundations – with official data showing the UKs current account deficit with the rest of the world is at it highest highest since 1989.

The UK’s trade deficit (plus the losses UK plc makes on its overseas ventures) hit £21bn in the three months to September, from a deficit of just £6bn in the previous quarter.

There was also more bad news for the government as the Office for National Statistics (ONS) data showed that public finances deteriorated last month and the much needed re-balancing of the economy was not happening.

Growth is being driven by consumer credit and household debt, despite the need for exports and manufacturing.

“The national accounts for the third quarter provide a few reasons to doubt that the UK’s economic recovery will be able to maintain its current strong pace for much longer.”

They pointed to figures showing real incomes grew by just 0.4 per cent for the quarter but spending was up 0.8 per cent, suggesting people were using their savings or borrowing to spend.

“Lower saving can only support growth in spending for so long. Meanwhile, the current account deficit widened. So for now, the economy’s growth spurt seems to be exacerbating existing imbalances in the economy, rather than helping them to heal,” they added.

Whilst there has been some manufacturing growth driven by the UK automotive sector, the much-vaunted ‘re-balancing of the economy’ toward manufacturing to create a sustainable recovery is now illusionary, if not abandoned altogether.

Unite has warned that the UK is again relying on credit and a housing price bubble rather than a strategic shift in the economy towards manufacturing, as proposed in its document ‘Made In Britain – A Unite Strategy For Manufacturing Growth In The UK‘.

The Tories have clearly not learned the lesson of the last two decades.

One Response to “Growth is being driven by consumer credit and household debt, despite the need for exports and manufacturing”