With little expected today from the chancellor that will make things any easier for those all important 'hardworking people', this will be an Autumn Statement that passes most people by. 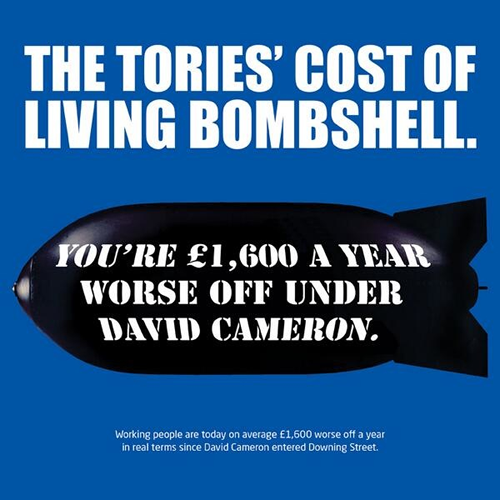 Labour has an interesting poster out today to coincide with chancellor George Osborne’s Autumn Statement, due at around 11.15 this morning.

The poster is an attempt by Labour to keep hammering the chancellor on living standards. For while Osborne’s headline GDP growth figure looks impressive – the latest quarter of 3.2 per cent at annual rate is more than in any other G7 country – median pay remains frozen at the level it was in 2005, resulting in the average person being £1,600 worse off than they were in May 2010 as prices rise significantly faster than wages.

What’s perhaps most concerning is the fact that, while in the aftermath of previous recessions incomes had recovered by this point, this time around they continue to ‘flatline’, as Ed Balls likes to say. See this graph below from the excellent James Plunkett of the Resolution Foundation. Figures published yesterday show that real household disposable income has fallen dramatically since 2009, and remains at a level first achieved in 2005.

Stats like this are far more important to most voters than GDP numbers; and even the latter look less impressive when you consider just how long it has taken the country to get back to a point where the economy is growing at all.

At the time of George Osborne’s emergency budget in October 2010, the OBR predicted that by this point we would have achieved growth of 7.7 per cent. It’s actually been a modest 2.6 per cent. The UK remains 2.5 per cent below its pre-crisis peak while the US economy – which adopted a more Keynesian-style approach post-crisis – is now 4.6 per cent above its pre-crisis peak.

Things look even less rosy when one looks at the predictions made in the Office for Budget Responsibility’s (OBR) first ever report in June 2010. In terms of wage growth, the OBR predicted that “whole economy average earnings growth rises gradually in the forecast as productivity recovers. Growth of wages and salaries, which combine employment with average earnings, also picks up, reaching 5¼ per cent in 2014”.

The reality has been quite different, as most people can attest each time they visit the shops and find that their money is spread more thinly.

The economy is growing again (at last) but most people won’t have noticed. Their wage packets are shrinking in real terms and as a consequence their living standards are in free fall. With little expected today from the chancellor that will make things any easier for those all important ‘hardworking people’, this will be an Autumn Statement that passes most people by.