Roads in London are safer than they were twelve years ago, but they have become more dangerous since Boris was elected. 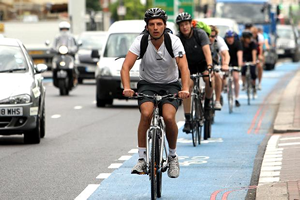 Four out of the five cycling deaths in the last nine days are linked to either the Mayor’s red buses, or to his blue paint.

After almost six years of inaction on cycle safety, the rise in the number of killed and seriously injured have to be placed at the Mayor’s door. That is why this morning he started blaming the victims, rather than talking about real solutions.

It is the lowest form of politics to direct attention to the mistakes that people may or may not have made as they cycled to work, or rode home to their families, in order to draw attention away from yourself.

The whole point of being Mayor is that you take responsibility for creating safer roads, where individual mistakes by a cyclist, driver, motorcyclist or pedestrian do not get punished with death.

Boris Johnson has previous form on blaming the victims, and repeatedly refused to apologise for the wildly incorrect statistic he used to claim that the majority of deaths and injuries where down to cyclist infractions of the rules. Transport for London refused to back up his claim and the Mayor reluctantly agreed it wasn’t true, but it was a resentful, grudging conversation.

The Mayor even returned to his favourite theme that London’s roads were getting safer for cyclists and he wanted me to apologise for saying they were not. The reality is that they are safer than they were twelve years ago, but they have become more dangerous since he was elected.

My office have been trying to get TfL to make the post 2008 calculation on the ratio of cyclist death and serious injuries since July. We wanted them to do it so that we could avoid another spat between me and Boris over who had better statistics.

Instead TfL have told us that ‘they do not regularly publish’ such figures and directed us instead to the raw data. The calculation seems easy enough so here it is:

In 2008, on average a cyclists could make 401,910 trips before being killed or seriously injured.

In 2011, the average cyclist could make 364,361 trips before being killed or seriously injured.

The 2012 figures will show that this trend has accelerated; I have no idea what 2013 will finally bring, but I suspect it won’t be good news.

I have repeatedly warned Boris Johnson that his policies would lead to more death and injury. Whether it was slashing over £35m off the road safety budget, abandoning the road hierarchy which had previously made cyclist and pedestrian safety the top priority,  or stopping safety improvements at junctions because they might create a traffic jam.

The Mayor made mistakes and stayed firmly in denial about the consequences. He still is. For all the talk of a £900m cycle safety budget, he still believes in those comments about keeping ‘your wits about you’ and ‘there is no amount of traffic engineering that we invest in that is going to save people’s lives’.

The solutions are obvious and uncomplicated. Make 20mph the default speed limit across London. Give space for cycling by taking it away from cars and lorries. Ban HGVs during commuter hours. Get rid of the major gyratories and start from scratch with the redesign of places like Bow Roundabout and Old Street. Fast track all the safety measures on the top 100 most dangerous junctions.

While the Mayor is doing all of that, he could start to enforce the rules on our lawless roads, so we no longer have 62 hit and runs a week in London, or a situation where the majority of drivers with over 12 points on their licence are legally allowed to drive.