This weekend Swiss voters rejected a referendum proposal to cap pay for top bosses at 12 times the pay of their lowest-paid employees. 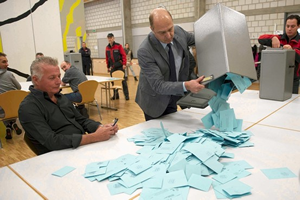 This weekend Swiss voters rejected a referendum proposal to cap pay for top bosses at 12 times the pay of their lowest-paid employees.

But the headline result obscures the scale of public anger, in Switzerland and elsewhere, at the growing pay gap between the super-rich and ordinary workers. The focus of the debate also has implications for policy-makers and campaigners keen to tackle the disproportionate share of income captured by a tiny, wealthy elite.

Opponents of the referendum wisely chose not to defend pay packages such as the $78 million severance deal demanded by Novartis CEO Daniel Vassala. Their case focused primarily on the threat that a pay cap posed to jobs and foreign investment in Switzerland.

This is a debateable argument. Research from the High Pay Centre suggests that there is little need for companies to pay executives such extraordinary sums of money. The pool of people capable of running companies is not as limited as executives argue, the demand for their skills is not as high they suggest, and the quality of executive leadership is not the sole determinate of a company’s success.

But that is, to some extent, beside the point. What is important is that the corporate lobby did not defend the rise of top earners in economic or moral terms. There was little attempt to argue that the growing gap between the super-rich and ordinary people is good for the economy or Swiss society. Nobody said that executives deserve the multi-million dollar pay packages that have become increasingly commonplace over the last two decades.

Instead the Swiss referendum pitched a public who largely want to live in a more equal society where pay is fairer and more proportionate, against footloose global corporations and individuals who can bully societies into offering them favourable regulations and tax regimes.

It is unsurprising, given the mooted threat to jobs and growth, that Swiss voters yielded to this pinstriped protection racket. At the same time, it is deeply worrying for fans of concepts such as fairness or democracy.

The debate will sound familiar to anyone who has followed arguments related to, say, the 50p tax rate in the UK; the EU bankers bonus cap; or the Robin Hood Tax on financial transactions.

Each policy enjoys considerable public support, but concerns remain that they will struggle to work in one country or region alone.

Speaking about the Swiss referendum on CNBC last week, Switzerland-based banker Luciano Jannelli of MIG Bank even said that he might be tempted to reverse his opposition to the pay cap if it was applied ‘multi-laterally.’

Governments brave enough to set an example for others to follow will be key to breaking this impasse. And hopefully the referendum in Switzerland will inspire other countries, including the UK, to continue the debate about top pay.

At the same time, though, the global nature of corporate power suggests that perhaps we need similarly international agreements and institutions – and campaigns – to stick up for the interests of ordinary people against big business and the super-rich.