Through their (in)direct support of Assad, the Stop the War Coalition blindly ignore Russia's own imperialistic goals in the region and prove themselves anything but anti-war. 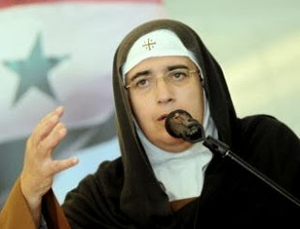 They call themselves an anti-war movement. Set up in 2001 in the UK to counter the Bush Administration’s ‘War on Terror’, the Stop the War Coalition claims to defend civil liberties.

And yet their binary vision of ‘West equals evil/anti-West equals good’ has led them and other self-professed ‘anti-imperialists’ to adopt a utilitarian vision of the conflict in Syria.

Far from standing with the oppressed, their stance has proven that Syrian blood means little. Most recently, they invited Lebanese-Palestinian nun Mother Agnes Mariam to speak at their International Anti-War Conference, who preaches that Assad is a protector of minorities and all havoc in the country has been caused by militant Sunni jihadists.

The hypocrisy lies in the fact that her views and actions make her the exact opposite of anti-war.

Unfortunately, Agnes Mariam has exploited her religious status to be an accessory to mass murder. Syrian Christians for Peace and Father Paolo Dall’Oglio, an Italian Jesuit priest based in Syria who is now missing (believed to have been kidnapped by the Al-Qaida affiliated Islamic State of Iraq and the Levant), have called Sister Agnes a regime agent, the latter claiming that her “interpretation of the facts is always selective and one-sided”.

In 2012, she blamed the Houla massacre on the rebels, claiming that the victims were Alawites and Shia converts. This contradicted the United Nations’ investigation, which found government forces and Shabeeha [paid regime militia] culpable.

Mo’dhamiya (Damascus countryside) has been besieged for almost a year. Civilians living inside are dying of starvation due to the strict blockade imposed by the Syrian government, which prevents food, water and medical supplies getting in. Agnes Mariam allegedly encouraged civilians to evacuate the area by saying that “it is better if unarmed civilians surrender and turn themselves in”. In doing so, she was complicit in the detainment of 200 plus civilians from the area, the fate of whom presently remains unknown.

When the chemical weapons attack was perpetrated in Ghouta, she presented ‘evidence’ to the U.N. to try and pin the blame on the rebels. First, she determined that the videos were “manipulated and disposed with theatrical arrangements.” She then concluded that the children shown in the video were actually Alawite children kidnapped from Latakia (the same line was given by Bouthaina Shaaban, the political and media advisor to Assad).

Her polemics, however, were refuted by many organisations, including Human Rights Watch, who issued a statement saying: “there’s just no basis for the claims advanced by Mother Agnes.”

Agnes Mariam has now ‘withdrawn’ from the conference after two keynote speakers, Jeremy Scahill and Owen Jones, refused to share a platform with her. While this is news worthy of celebration, we should not forgive nor forget the fact that StWC invited her in the first place. Through their (in)direct support of Assad, they blindly ignore Russia’s own imperialistic goals in the region and prove themselves anything but anti-war.