Contrary to some popular wisdom, after the crash public opinion is now clearly on the side of substantial government intervention. 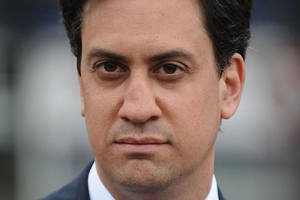 Steve Hart is chair of the Centre for Labour and Social Studies (Class), the trade union-based Think Tank

Polling for Centre for Labour and Social studies (Class) published today in advance of our National Conference on Saturday provides encouraging news for Ed Miliband, especially on two key fronts.

Twice as many see Ed Miliband as more on the side of working people than David Cameron – by 35 per cent to 16 per cent – although 38 per cent replied neither. Miliband’s lead is important but the large ‘neither’ figure shows that a lot more needs to be done if Labour is really to convince working people it is on their side.

77 per cent respond that they are not personally benefitting from the renewed growth in the economy. Just days after the Coalition crowed about rising GDP announcements, these figures suggest that the Labour focus on living standards resonates with the public beyond current Labour supporters; 74 per cent of those who voted Tory in 2010 and 83 per cent of those who voted Lib Dem say they are not benefiting as the economy grows again.

The next election could be determined in these two sets of figures – if the Coalition fails to deliver perceived living standard growth alongside the expected GDP growth, while Labour is able to further sustain the view that it ‘is on the side of working people’, Ed Miliband could be on course for victory.

How does Labour win this argument – how does Labour consolidate the LibDem voters already won since 2010, but also win over significant numbers of thus far elusive Tory voters from the last election?

Winning a decisive majority requires both of those groups, while ensuring strong support across social classes, as well as restoring a big C2DE lead. Class would argue that bold, fearless and radical is the road to victory. New Labour-lite and triangulation provide not only the wrong policies for Britain but are more likely to lead voters in to the hands of the Coalition.

Ed Miliband at his best – and most popular – has stood up to power; to Murdoch, to ‘consensus’ over Syria, and to energy prices. His approach was right and worked well for Labour. Our conference will explore and debate realistic and radical alternatives for Labour – how it can further its already popular policies, and what other ideas it should adopt.

Contrary to some popular wisdom, after the crash public opinion is now clearly on the side of substantial government intervention. The all-conquering power of the free market seems to have lost its allure to much of the public

Voters were narrowly in favour of private sector rent  controls – 45 per cent said the government should have control over rent levels while 43 per cent disagreed – however 32 per cent of Tories, 44 per cent of Lib Dems and 50 per cent of UKIP supporters wanted  controls in this area.

There appears to be strong cross party support amongst voters for defence and extension of the public sector.

Far from being a vote loser, nationalisation is popular!

Disenchantment with the market probably is clear from  views of the banking crash – 65 per cent are ‘not confident that enough has been done to avoid another banking crash like 2008 happening in the future’, including 58 per cent of Tory supporters.

So Ed Miliband is making important progress, but has yet to convince many. Our poll gives confidence that more radical and bold ideas, just like the energy price freeze, are popular with many current supporters of other parties, and point to the best way forward. This is emphatically not a narrow core vote strategy, but the road to a popular majority.

4 Responses to “Radical and bold ideas, like the energy price freeze, are popular with voters. Let’s have more of them”