Foreigners stealing our NHS jobs? There is another, sinister, side to the story of migrant workers in the UK, and when it comes to health workers the story is tragic. 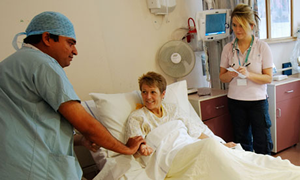 Foreigners stealing our NHS jobs? There is another, sinister, side to the story of migrant workers in the UK, and when it comes to health workers the story is tragic.

Recent articles criticising the number of internationally born staff working for the NHS both undermines the vital work they do and misrepresents the global impact of this issue.

Health workers are essential for health care. Without health workers there are no health systems. Yet there is a critical global shortage of them, and it is the poorest countries that are feeling the effects the most.

Take Africa for example; it includes the worst health indicators in the world, people there die of preventable diseases more often than anywhere else. Yet while African people have 24 per cent of the global disease burden, they only have 3 per cent of the health workers to tackle the problem.

At the last estimate the world is 4.2 million health workers short of an adequate workforce. As well as this overall shortage, which needs to be addressed through training, retention and investment, there is the pressing issue of global health worker imbalance caused by migration.

Of course health worker migration is a complex issue, caused by several interrelating factors. But there is one cause that it is extremely important for us living in rich countries to be aware of.

Much of the health worker brain drain is caused by wealthy countries actively recruiting internationally trained health workers to fill the gaps in their health service provision.

In 2006 it was estimated that 25 per cent of all doctors and 5 per cent of all nurses that were trained in sub-Saharan Africa were working in the wealthy OECD member countries, meaning rich countries are befitting from the already meager finance that the poorest countries in the world are able to put in to training health personnel. 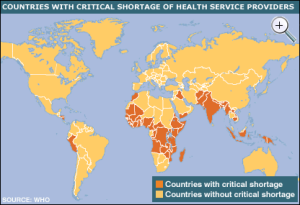 This is no small financial loss for low-income countries. It is estimated to be in the billions, and for some countries it is thought that they may lose more funds through the health worker brain drain than they receive in aid for health. In other words, this is aid in reverse. This financial loss translates into the loss of lives, and the strengthening of global inequality.

Here in the UK, we are currently one of the largest destination countries for migrant health workers. While the UK did introduce a Code of Practice on the international recruitment of health workers in 2001, its impact has been questioned. The UK’s approach has been to actively recruit internationally trained health workers when it suits its current situation, and place strict restrictions on recruitment when it doesn’t.

The latest figures show that 26.63 per cent of doctors working in the UK gained their primary medical qualification outside of the European Economic Area, often trained at public expense. This means poor countries are paying to train the UK’s health workers while their own health systems suffer because of a severe shortage.

The World Health Organization has a Code of Practice on the International Recruitment of Health Personnel, but it is voluntary so lacks the teeth to make a real difference.

Even if we stop relying on internationally trained health workers tomorrow, we have been doing it for years, and in recognition of that we should compensate the governments of low-income countries whose health workers are keeping the NHS afloat.

There is a reason we must address this urgently: Europe’s aging population and the current domestic shortages of health workers means the continent is on the edge of a huge deficit of health workers. Unless wealthy countries take action to address their workforce shortages and adhere to ethical recruitment practices, the demand will draw more health workers from developing countries.

Without compensation for this loss, the progress the world has made in improving global health will be put at risk.

Health Poverty Action has launched a new report today: The Health Worker Crisis: An Analysis of the Issues and Main International Responses

One Response to “Foreigners stealing our health worker jobs? There is another side to this story”