In other words, in the long-term it will be 'green crap' that brings down the real cost of energy by making homes less wasteful.

According to the front page of today’s Sun, David Cameron has ordered aides to “get rid of all the green crap” that he believes is pushing up families’ energy costs.

Downing Street has rebutted the allegation, but it doesn’t seem particularly far fetched to suppose that Cameron might have said such a thing. He has, after all, spent recent weeks trying to blame the rise in the cost of energy almost entirely on so-called ‘green levies’.

So what exactly is this ‘green crap’ that Cameron is so exercised about?

As it turns out, it’s mostly made up of measures to help low-income households conserve energy, as this helpful graph from the Guardian demonstrates. 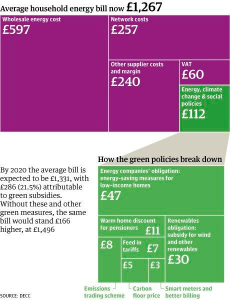 These green policies add up to a total of £112 a year. However the Committee on Climate Change (CCC) says that measures such as boiler replacement, insulation measures and efficient appliances will be worth around £145 per household by 2020 (the Guardian reckons £166), with more savings potentially available in the 2020s.

In other words, in the long-term it will be ‘green crap’ that brings down bills by making homes less wasteful.

Which is why, by 2020, the average household will be better off as a result of ‘green crap’. Or Perhaps they will be poorer, if it’s really true that Cameron wants to get rid of it.