Boris is using this position as Mayor to help the elite reshape London - regrettable consequences. 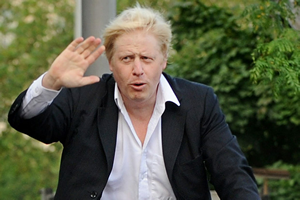 Nobody could be surprised by Boris Johnson’s latest column defending bankers and the rest of London’s super-rich elite.

He’s an expert in baiting the left on subjects like bankers’ pay, then switching his ground to promote the living wage. But he isn’t just a newspaper troll. He is also the Mayor of London, and he is using this position of considerable power and influence to help the elite reshape London, with real world consequences.

Did you know, for example, that the only time the Mayor has travelled to Brussels in person was to lobby for the hedge funds?

His advocacy of the wider financial services sector is incredibly one sided, without any consideration of their role in the wider London economy.

He has talked about their tax contributions, but not their tax avoidance and subsidies. He calls them the engine of our economy, but doesn’t seem too concerned that (so the New Economics Foundation tell me) only 6p of every pound deposited with RBS/Natwest goes into British businesses. He has lobbied against the bankers’ bonus cap, the Financial Transaction Tax and a number of other modest reforms of the banking industry.

His advisors, his research, the evidence he draws on are all aligned with the needs of the elite he defends.

Where does the Mayor imagine the 1 per cent make all of their money, and hold all of their wealth? What about the mis-selling scandals, the continued exploitation of workers in shakily built factories, the naked profiteering of the big six energy companies? He doesn’t want to look at the damage done by an unequal society to London’s economy and Londoner’s living standards.

The 1 per cent lobby against a mandatory living wage, saying it would mean job losses, while their pay rose 14 per cent in a year. Yes, some of that extra pay will go towards their sizeable tax returns. But one result of 700,000 Londoners earning less than a living wage is a £700 million annual subsidy from taxpayers to employers. Why not cut out the taxman and share the profits more fairly in the first place?

The Mayor champions a voluntary living wage, but in the same breath defends the right of employers to pay their employees poverty wages.

The 1 per cent are driving up property prices in the capital, exacerbating a housing crisis that has no end in sight. London is already the most unequal city in the developed world, with the wealthiest tenth of the population amassing 273 times the wealth owned by the bottom tenth. Most wealth at the top lies in pension funds, investments and property.

This is bolstered by taxpayer subsidies like Help to Buy and housing benefit, policies the Mayor supports that avoid the root causes of our housing crisis and instead help ordinary people scrape by to the benefit of the 1 per cent.

The Mayor is their champion, supporting the construction of incredibly expensive tower blocks that are often build on the site of demolished council housing.

What’s really infuriating is that the Mayor actually has a good news story on pay, but he doesn’t give it any attention.

I’ve tracked the difference in pay between the highest and lowest paid staff in the different bodies the Mayor oversees – City Hall (the GLA), Transport for London, the Metropolitan Police Service and the London Fire Brigade. Since he became Mayor, pay has actually become slightly more equal across all bodies except TfL. This is both because top pay has slightly dropped and bottom pay has risen. 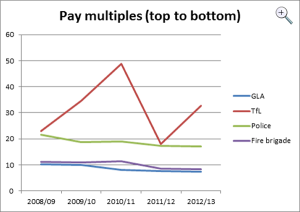 I wouldn’t go so far as to say everything has been rosy in these organisations over the past five years. But I doubt the Mayor would say it has been a disaster. He just doesn’t want to look at whether he can replicate this move towards equality across London at large.

Why can’t he get on and make London more equal, a place where getting a job really does pay enough to build a life on, rather than a city where more and more of us feel like we are just sweated by a global elite?

3 Responses to “Boris, the super rich and pay inequality”