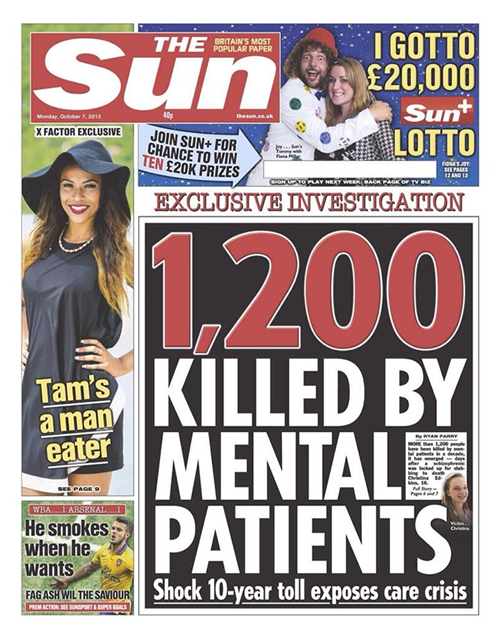 Despite the Sun being well known for brash headlines and front pages, this was the most common reaction when I showed people this morning’s front page – “are the Sun really sinking that low?” in other words.

So what’s wrong with it?

Firstly, there is no such thing as ‘mental patients’. There are patients with mental health problems – which range from depression to paranoid schizophrenia – but there are no ‘mental patients’. I suspect the Sun knows this (how could it not?), but has used the term to appeal to the worst elements among its readership, as it did with its “Bonkers Bruno” headline 10 years ago.

As for the scaremongering headline about 1,200 people killed by ‘mental patients’ – this is just that: scaremongering. As the Mirror reports today, people suffering from mental illness are in fact far more likely to fall victim to crime (including violent crime) than those who are well.

The charity Time to Change has been documenting the facts on this for some time now, which I suspect the Sun has willfully chosen to ignore. As the charity puts it:

Why report the facts, though, when you can shift more copy by scaring people about hoards of dangerous  ‘mental patients’ on the loose?

Today’s Sun front page represents the absolute worst of our printed media. Fortunately, there is some consolation for those who believe strongly in a free press in the fact that the Mirror has, on the same day, gone with a more accurate and reasoned story on mental illness. The real question is how to ensure the facts are heard above all the dishonest sensationalism.

32 Responses to “Today’s Sun front page: sensationalist, dishonest and an example of everything that’s wrong with the press”