Critics, who represent a wide range of interests, have called the Bill ‘unworkable’. 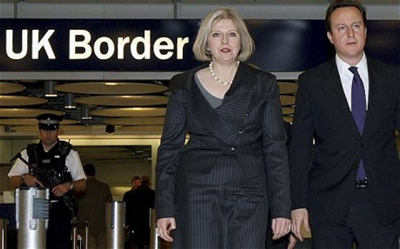 Yesterday the government published its Immigration Bill, which will receive its second reading in Parliament at the end of October. One week after the Lampedusa disaster, the home secretary Theresa May has justified the new legislation as a means of tackling undocumented migration into the UK.

Critics, who represent a wide range of interests, have called the Bill ‘unworkable’.

The Bill itself is in seven parts. Changes to fingerprinting, bail for detainees and removal procedures are covered in Part One of the Bill. It simplifies and consolidates previous legislation relating to detention and removal and allows immigration officers to collect biometric data from immigrants not covered by previous legislation.

Part Two of the Bill places further limits on appeal rights, cutting back the appeal rights from 14 types of decisions to 4. This part of the Bill also aims to ensure that the Courts reflect Parliament’s desire that Article Eight human rights claims – the right to family life – should not be used by foreign national prisoners to disrupt plans to remove from the UK.

In this part of the Bill, Theresa May has set herself up against the courts and moves to curtail the rights to appeal may well be legally challenged. The Bill also introduces the legislative framework for embarkation checks on passengers leaving the UK as well as for short-term migrants – primarily students and those with work visas – to make a financial contribution to the NHS

The UK Border Agency will be afforded extra time in which to investigate marriages that they or registrars regard as suspicious. Most controversially, private landlords will be subject to civil penalties if they rent their properties to those without leave to be in the UK.

This part of the Bill has been slated as being unworkable and potentially discriminatory. The checks will apply to everyone and have the potential to be intrusive. Others fear that UK citizens from ethnic minority groups may face discriminatory treatment by landlords who do not want to risk a fine.

In a week when Home Office IT systems have again been subject to criticism, many experts fear that an accurate and up-to-date database of immigration offenders does not exist.

The landlord checks have been subject to the most criticism; some researchers fear that these proposals will do nothing to deter undocumented migration, rather the would-be migrant without the correct papers will use (and pay for) the identity documents of others to secure rented accommodation. The proposal may force undocumented migrants to sublet housing from their legal compatriots and place those without papers at greater risk of exploitation.

Despite its aims, the Bill is unlikely to reduce undocumented migration to the UK or to Europe. But this issue remains a problem and big part of the in-tray of David Hanson, Labour’s new shadow immigration minister.

There are no easy answers to this problem and there is little public support for any amnesty or earned regularisation programme. However, there are some interventions that can make a difference.

Estimates of the numbers of undocumented migrants in the UK vary, but most commentators now use figures of about 300,000 persons, rather than higher estimates of around 850,000. The recession has meant that the UK is less attractive to the potential undocumented migrant and the e 2007-2011 asylum ‘legacy’ programme, cleared the books of 150,000 people that they UK could not remove.

While undocumented migrants are a diverse group of people, in recent years many of them have made the journey into this irregular status as a result of failures in the asylum system. In recent years about half of those initially refused asylum appeal the decision, with 25 per cent of appeals being allowed in 2012 – arguably evidence of poor quality initial determination processes.

Even if there is no appeal, the government often finds it difficult to remove them. In part this has been down to administrative ineffectiveness by the UK Border Agency, but there are other reasons which include the costs and difficulty of returning individuals to many countries.

At times, too, the UK government has suspended returns to particular countries, such as Zimbabwe, while making no attempt to resolve the cases of asylum-seekers whose application has failed. As a result, these individuals and families remain in limbo for years: not legally entitled to remain in the UK, nor removed.

Ensuring high quality asylum decision-making and preventing backlogs can dent the problem of undocumented migration, as the Home Affairs Select Committee has pointed out today.

The UK might also look to supporting Frontex, the EU’s agency for external border security, whose boats continue to rescue migrants at sea. Some regularisation of undocumented migrants is inevitable, as there are many individuals who the UK Border Agency would struggle to remove.

There are overwhelming humanitarian and practical reasons for regularising the UK born children of undocumented migrants, a group who have had no say in their condition.

As a group, many undocumented migrants are from countries where a young person with some education struggles to find employment. These would-be migrants are not from the poorest sectors of society and have often completed secondary education, but do not have the skills to enter the UK legally through routes reserved for skilled migrants.

In the face of unemployment or under-employment country, and no career prospects at home, Europe is an attractive option.

Yet there has been very little debate about unemployment as a push factor in irregular migration. Progressives need to give much more attention to the conditions in those countries that produce migrants.

2 Responses to “Despite its aims, the Immigration Bill is unlikely to reduce undocumented migration to the UK”