Paris Lees writes on why she's protesting outside the Daily Mail's offices today, but why she wants to Mail to prosper, rather than close. 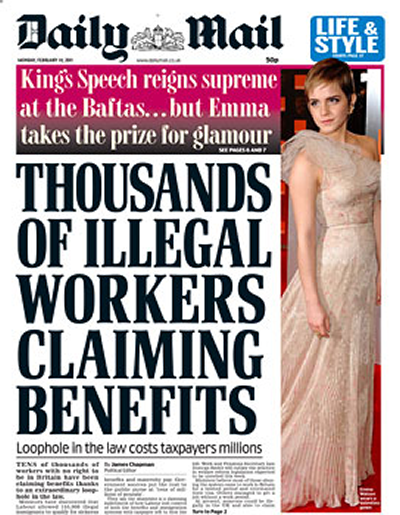 Paris Lees is a writer, broadcaster and campaigner, who works to raise awareness of transgender people. She is both Channel 4 and Radio’s first trans woman presenter and has written for the Guardian, Telegraph, Independent and VICE, and has a monthly column with Gay Times magazine

The following is based on a speech she will give to protesters today.

Today I will, for the second time this year, protest outside the Daily Mail’s London headquarters. I wish to express my feelings about one of Britain’s most well read papers, which also own one of the most popular websites on the planet.

I visit MailOnline.com sometimes, though I’ve never bought the paper. I know family members who do and I’ve read copies handed out for free on trains and planes. It’s the only paper I know that makes the Sun look friendly and many people I know hate it. You might not read it but some people do and it affects the way they perceive the rest of us.

A few weeks ago I lunched with Robin Esser, executive managing editor of the Daily Mail. He agreed to meet me and another trans person and their father as part of a project I work with called All About Trans. I’ve been involved in ‘reactivism’ in the past, complaining and protesting, and there’s definitely a time and place for it – today, for example.

But I prefer, when possible, to focus on positive engagement. Perhaps it’s the optimist in me, or the fool, but I like to believe that if you stick journalists in a room with the people they are prone to mock and tell lies about, they’ll probably stop doing it.

As part of All About Trans, I also met with Tom Peck last summer, who writes for the Independent and used to write for the Mail. During the course of 2013 Tom has gone from making jokes about trans people having broad shoulders to criticizing the BBC for referring to Wikileaks collaborator and transgender woman Chelsea Manning with male pronouns. He attributes his enlightenment to All About Trans, and he’s not the only one.

I want to change the way the media treats vulnerable minorities like transgender people. This frequently puts me in an awkward position as a journalist, because how are you supposed to critique the very media you are trying to become part of? And I thought twice about protesting today because, honestly, I’d love to write for the Mail. I’m a writer and I write to be read. People read the Mail.

I think most journalists, if they were honest, would probably be quite chuffed to get a commission from the Mail, so the only thing that surprised me about Mehdi Hasan this week was his hypocrisy. There’s no shame in wanting to write for a one of Britain’s oldest dailies.

But it’s because I’d like to write for the Mail that I am protesting today. I believe in good journalism. I don’t want to destroy the Mail – to lose any British newspaper would, in my opinion, be a national tragedy. I want to see a press that is fair and open and valued by the public it serves. As Sunder Katwala pointed out in the New Statesman yesterday, it was pressure from the Mail that led to greater closure and justice for the family of Stephen Lawrence. I would like to see more of that and less of the Jan Moir bullshit, personally.

Don’t think that Mail’s top brass can possibly ignore this demonstration and the outpouring of public condemnation this week. Change is possible – and, if the industry and this paper in particular is to survive, and attract younger readers from modern, diverse Britain – it is also necessary.

Finally, though I’m pleased the attack on Ed Milliband’s father has sparked a debate about the Mail’s role in our public life, let’s not forget all the little people it has bullied over the years too. What the Mail has done to the Milliband family it has also done to some of the most vulnerable members of our society.

In March I demonstrated, here, against Richard Littlejohn’s harassment of Lucy Meadows, a schoolteacher who took her own life following months of unwanted press intrusion. Littlejohn questioned whether Meadows was ‘in the right job’, and it’s precisely this threat of being gratuitously monstered by the press that stops many trans people living full and meaningful lives.

Please do check out the positive work we’re doing at AllAboutTrans.org.uk.