The Scottish press are overwhelmingly blaming Ineos for the closure of the Grangemouth petrochemical plant. 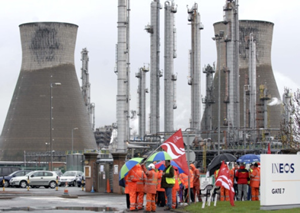 The announcement yesterday by Ineos that it plans to close the petrochemical plant at Scotland’s iconic Grangemouth complex, with the loss of about 800 jobs, has shocked politicians and the public alike, who are fearful that such action by the company could lead ultimately to the closure also of its oil refinery – a major supplier to Scotland and areas of northern England.

“The closure of the petro-chemical plant puts the refinery at risk, and is a major blow to many manufacturers in which the plants have been a vital part of the supply chain.

“Official figures today showed refined oil and chemicals were one of the main drivers of growing Scottish exports this year. That sector, in which Grangemouth has been dominant, was worth £3.7bn last year.

“If much of that is thrown into reverse, with imports required instead of exports earnings, it will have a significant impact on the cost of sourcing materials from elsewhere, and potentially on the UK’s trade figures.

“Among other big questions that arise: what, if anything, is the government doing about security of refining supply?”

Ineos has sought to pin the blame on UNITE the union for the plant closure, for failing to fall in line behind its ‘survival plan’ which includes ending the final salary pension scheme and a no-strike pledge from the workforce and union.

Amidst reports that UNITE is now prepared to make concessions in a last minute bid to halt the closure, across much of the Scottish press it is the employers that are coming in for heavy criticism.

Arguing that “not since the closure of the Ravenscraig steel works in 1992 has Scotland faced as serious a threat to its industrial base as it does today”, the Scotsman in its leader column concludes:

“A blame game now is inevitable, if not particularly productive. Nevertheless, it has to be said that the management approach to this whole dispute has been brutish and reckless. The union has characterised it as akin to blackmail, and there is more than a little truth in that.

“This is not the 1970s. This is not how we expect responsible management to act in the 21st century. The argument from some observers that Ineos was seeking all along to close Grangemouth is difficult to refute with any great conviction, given the circumstances.”

Calling on the UK and Scottish governments to work hand in glove to find a solution, the paper continues:

“The priority now should be first to see if there is any scope whatsoever to get Ineos to stay at Grangemouth, if not on the present scale then in a smaller role, perhaps centred on the oil refinery side of the business.

“If, as insiders seem to indicate, that is a hopeless task, then the emphasis should shift to whether another operator can be found who would be willing to take it on, in full or in part, with taxpayers’ help if necessary.

“Despite the high political stakes, co-operation between UK and Scottish governments is crucial. But let us not fool ourselves here. The situation is dire and the prognosis is not good.”

In a further harsh assessment at the actions of Ineos, the Herald today writes:

“Disbelief. Distress. Anger. That is what is left for workers at the Ineos petrochemical plant in  Grangemouth. “I feel sick,” said one employee, struggling to get his head round the bombshell announcement that the plant was to close. “That’s it. Folk will be lucky if they have a house at Christmas.”

“Are such concerns for worker welfare keeping Ineos owner Jim Ratcliffe awake at night? That seems highly questionable. The conduct of Ineos, painting the union as culpable for the plant’s closure and the loss of its members’ own jobs, has been at times astonishingly heavy-handed.

“Even the refinery cannot be said to be safe: Mr Ratcliffe has warned that if the petrochemical plant closes it could be the end for the refinery as well.

“It may well be that the company can legitimately argue that aspects of the way Grangemouth is run need to be modernised. Some observers of this dispute may have been surprised to learn that a final salary pensions scheme for Grangemouth employees exists, given how many such schemes run by other companies have closed, relatively uncontroversially.

“However, none of that justifies, or indeed explains, the behaviour of the company, which unions and others understandably find highly suspect.”

“Michael Moore – until recently Scottish secretary – said closure ‘would be an act of industrial vandalism’ the likes of which had not been seen in decades. Many, far beyond the membership of Unite, will agree. If it shuts for good, it will be Ineos, not the devastated workers, that bears the lion’s share of responsibility.”

“All of Scotland knows the true blame for the closure lies with Ineos, a firm impatient to have their way with no regard for the consequences.

“When the livelihoods of more than 800 workers are being decided from the leather-padded stateroom of an ocean-going luxury yacht, then there can be only one outcome.

“Jim Ratcliffe and his capitalist crew could have walked away from Grangemouth as the guardians of an orderly transition to a new owner.

“Instead, in an over-inflated huff, the site has been closed down, leaving the firm in a position that it is barely able to credibly open again.

“Demanding the workforce accept a 96-hour deadline to decide their future is not a sign of a company who expected a positive response.

“With each day that passes, the likelihood of getting the plant opened and sold as a going concern recedes.”

Seeking to draw out the wider implications of the decision for the SNP’s independence campaign, the paper continues:

“A country reliant on the oil revenues of the North Sea without an onshore refining capability is almost unimaginable. For the credibility of independence economics, it is vital to keep Grangemouth running. The SNP government nationalised Prestwick Airport, making losses of £2million a year, almost at the drop of hat.

“But the economics of Grangemouth are of a different order and the crisis over the last week has exposed the limits of the power the Scottish government have in the global arena. In an independent country, with so much fuel refining and manufacturing at stake, a Scottish government would look even more vulnerable to the vagaries of the market.

“But whether this is a referendum gamechanger remains to be seen.”

4 Responses to “Grangemouth – an ‘act of industrial vandalism’”