Food banks are simply one indication that the government is presiding over a shocking increase in poverty and deprivation. There are many more. 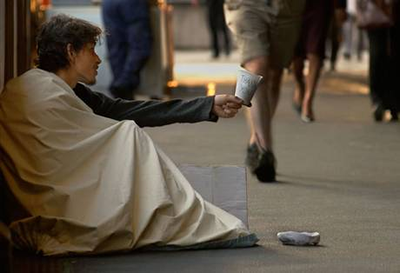 Food banks are a good example of David Cameron’s Big Society in action: do it yourself, because we no longer care.

If that sounds like a rather harsh assessement it is because it is increasingly hard to reach any other conclusion. As Chris Mould, executive chairman of the Trussell Trust, a charity which provides food banks, puts it:

“We’re talking about mums not eating for days because they’ve been sanctioned for seemingly illogical reasons.”

By sanctioned he means had their benefits stopped.

The awareness of what is going on is out there, but the government is either in denial or is genuinely unconcerned with the plight of those who are having to seek out food banks in order to fill their stomachs.

A case in point is the fact that the coalition has today blamed the increase in the number of people using food banks on a greater number of foodbanks. “The Trussell Trust itself says it is opening three new food banks every week, so it’s not surprising more people are using them,” a government spokesperson said.

It is perhaps unsurprising that the government should feel this way. It would, after all, be unusual for a Conservative-led coalition to be devoid of the pessimism about human nature that conservatism is known for – i.e. people with full stomachs are obviously just visiting food banks for free food, right?

Were we only seeing a rise in the number of food banks there might be an argument to be had. But we aren’t. Food banks are simply one indication that the government is presiding over a shocking increase in poverty and deprivation. Here are a few others:

1. Rough sleeping in London has increased by 13 per cent in the past year, with 6,437 people sleeping rough in the capital in 2012.

2. 50,000 council tenants are facing eviction because of the Bedroom Tax, with potentially tens of thousands more also affected.

3. The number of people working on zero hour contracts has surged since the coalition came to power in 2010, with some estimating that around 1 million people – 4 per cent of the workforce – are now on precarious zero-hour contracts.

4. Britain has suffered a substantial fall in real wages – the second biggest out of all the G20 countries – since the coalition government took office.

5. The number of people using food banks to feed themselves and their families has gone from 40,000 a year under Labour to over 350,000 in the last six months alone.

During his time in opposition, David Cameron liked to refer to “broken Britain”. Judging be some of the dreadful statistics now coming out on a regular basis, he has a funny way of fixing it.