I think we should get back to anti-racist thinking, together. I'm astonished to discover that even serious people at Spurs seem to have lost their ability to think beyond Tottehnam High Road. 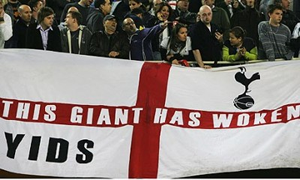 David Hirsh is a sociology lecturer at Goldsmiths, University of London, and editor of EngageOnline.co.uk

In London football there is a myth that Spurs is the Jewish team. Opposing fans have long sung antisemitic chants against Tottenham, and Spurs fans have long embraced the identity, singing ‘Yid Army’.

The FA has said that the word ‘Yid’  ‘is likely to be considered offensive by the reasonable observer’ and is ‘inappropriate in a football setting’.

The Community Security Trust, the Jewish body which fights antisemitism and the Board of Deputies of British Jews, has backed up this position. Clarke Carlisle, the chairman of the Professional Footballers Association, agrees. Kick it Out, the campaign against racism in football, has published a video made by Ivor and David Baddiel which calls for an end to this ‘Yiddo’ stuff.

But now David Cameron has said: ‘There’s a difference between Spurs fans self-describing themselves as Yids and someone calling someone a Yid as an insult.’

A Jewish friend of mine, a Chelsea fan, heard somebody near him shouting ‘Yiddos!’ at the Spurs fans.  My friend challenged him and was told, aggressively, ‘You should be with them!’ My experience as an Arsenal fan  is that I’ve heard chanting against ‘Yiddos’ at every game I’ve ever been to; I’ve heard fans around me making a hissing noise to mimic gas; they often glory in their foreskins, singing that they’ll be ‘running round Tottenham with their willies hanging out’.

I was at the Aston Villa away game last year and my kids were upset the antisemtic chanting. I told them not to worry too much; it is only a football thing. Then Yossi Benayoun, the Israel captain, scored the winner for Arsenal and the fans were singing his name all the way into the car park.

It is worth noting that antisemitic chanting at Arsenal is less endemic than it used to be; we’ve had some success in getting rid of it, but it is still around.

I was in Waitrose the other day and I heard a young man who was filling shelves in the kosher aisle say excitedly to his friend how it was great beating the‘Yids’ yesterday.

Last Saturday, Spurs fans were singing ‘Yid Army’ and ‘We’ll sing what we want’. Usually Jews constitute a tiny minority of Spurs fans (Ivor Baddiel estimates 5 per cent). Last Saturday was Yom Kipur, so there were even fewer Jews there than usual.

Spurs fans were subjected to murderous attacks at away games last year in Rome and in Lyon by fascists who thought that they were Jews.

In Amsterdam, a city where the Jews were picked out and murdered two generations ago, non-Jewish fans at Ajax also pretend to be Jews, while fans from other clubs ‘hate the Jews’. I think the origin of this is that Amsterdam is known as a centre in the diamond trade.

Everybody serious at Arsenal, West Ham and Chelsea agrees that this ‘Yiddo’ thing has to stop; ethnicity should have nothing to do with London football identity.

But there is resistance from Spurs fans, including Jewish ones. Some of them think that their use of the term subverts antisemitism and constitutes a reclamation of the word ‘Yid’, like when gay people reclaimed ‘Queer’. Another response from Spurs fans is that it is just fun and trivial; it is only a football thing and people shouldn’t get hot under the collar about it.

When Spurs fans say ‘we are the Yids’, how can you educate kids at Arsenal and Chelsea to stop saying ‘we hate Yids’? The problem is that hating (Tottenahm) ‘Yids’ has the potential to spill over into hating Yids. It does not remain a North-London football in-joke.

And intent isn’t always the key issue. When I was a kid, people used to refer to the grocer on the corner as the ‘Paki shop’.  Usually it was just a name or a bit of fun. Some people who used the term didn’t even know its origin. But it is good that people no longer use it because it was a racist term, irrespective of intent.

David Cameron’s position is that for something to be racist, it has to be intentionally, consciously hateful. It is a position dredged up from the 1970s, before anyone had heard of institutional racism, unintended exclusions, racist discourse or racist outcomes.

I think that some anti-racist Spurs fans are buying into this idea that Spurs really is the Jewish team. And that leads them to imagine that the experience of Jewish Arsenal, West Ham and Chelsea fans doesn’t matter because Arsenal, West Ham and Chelsea are just the enemy, and nobody should care what happens there; beyond the Tottenham-Jewish pale.

Some have conflated their Spurs and their Jewish identities. They think that ‘Yiddo’ is somehow a way of opposing antisemitism. I think we should get back to anti-racist thinking, together. I’m astonished to discover that even serious people at Spurs seem to have lost their ability to think beyond Tottehnam High Road.