In Rwanda, 24 of the 80 seats in the Chamber of Deputies are reserved for women. The quota system is just a push, the rest comes naturally. Perhaps the UK would find the same? 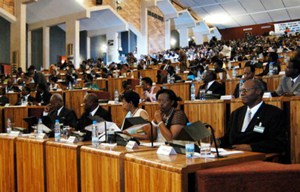 With more than half the Parliament made up of women, Rwanda has the highest representation of female parliamentarians in the world. This week, Rwanda will go to the polls and thanks to a successful quota system, we are assured that there will be a significant representation of women.

As one of those female members of parliament, I am particularly proud of the fact that Rwanda leads the world in this respect. We have made female representation in parliament a political priority and we put in place systems to ensure we achieved gender equality.

Just under 20 years ago, my country was in ruins. We had emerged from one of the worst genocides in modern history in which one million Rwandans died. The genocide was the result of a divisive and destructive culture that had pervaded our society.

In rebuilding our nation, we made a conscious decision to put inclusiveness and equality at the heart of the reconstruction process. Our constitution put in place a quota for female representation in parliament and women were called upon to take up the demanding tasks of physical and social reconstruction of the nation, social healing, unity and reconciliation, repatriation of refugees, peace building in times of insurgence, justice and governance programs.

There were undoubtedly challenges in this process. Low literacy levels among rural Rwandan women meant women were inclined to vote for her husband’s choice; urban women also tended to be more vocal than rural women; and male candidates were often better connected with wider networks among the local administration and local communities than women.

But we were not deterred and we implemented effective mechanisms to counter these issues. We went around the country and educated women on the benefits of the secret ballot; we ensured small parties were represented in every electoral coalition; and we put in place electoral laws that meant female candidates could not be out-competed by a better connected male candidate.

Rwandan women and men both rose to the challenge and we proved ourselves formidable partners in all aspects of the recovery of the nation. No noise was made, no eyebrows were raised, but gender roles had changed.

Women took the lead in healing the deep wounds in our society. Our economy is growing fast, our health service and schools are improving and our streets and villages, which once saw such bloodshed, are now the safest in Africa.

The prominent role played by women in parliament and throughout the government has helped transform attitudes throughout Rwandan society. Women now have much more say in their families and communities. As a society we are able to reach better decisions because of the experience and views of women.

The UK, with less than one in four members of Parliament female, still has a long way to go toward equal representation. The quota system may seem like a drastic measure, but Rwanda is proof it works.

Today you wouldn’t find a single Rwandan – man or woman – who disputes that the influence and leadership of women has been essential to Rwanda’s social and economic progress.

The proof of this is in the overwhelming public election of women to our parliament. Our constitutional quota only provides that 24 of the 80 seats in the Chamber of Deputies be reserved for women, but the electorate has consistently voted for more women.

In Rwanda, the quota system is just a push, the rest comes naturally. Perhaps the UK would find the same?