If opposition to the face veil is bigoted then my grandmother and great-aunt are bigots for describing their own experience of wearing the burqa in the 1930s and 40s as "physical and mental slavery". 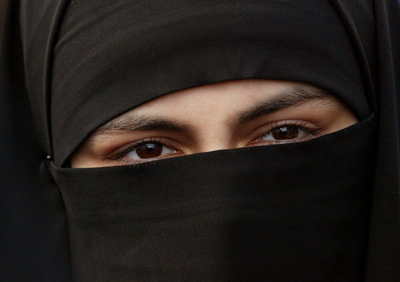 The burqa and niqab, face veils worn by a minority of Muslim women, are often misrepresented as something harmless, something we should be comfortable with.

This narrative assumes that all women choose to wear the face veil of their own free will; that this is not oppression but merely sign of deep devotion; and that veiled women are not isolated from the society.

Any challenge to these assumptions is unjustly branded as a sure sign of racism, orientalism and Islamophobia.

If opposition to the face veil is bigoted then my grandmother and great-aunt are bigots for describing their own experience of wearing the burqa in the 1930s and 40s as “physical and mental slavery”.

Despite the best effort of many to present face veiling as harmless, it depersonalises women and assigns them an existence different and separate from men, burdened by social norms such as a woman is the custody of her male guardians, strict gender segregation, non-essential conversation with men is prohibited etc.

It is, by design, a device of exclusion and apartheid.

Assuming that the face veil is a choice, many liberals conveniently forget to mention how this choice comes about and what the rationale behind it is. It is fundamentally different to any other type of clothing, an embodiment of a misogynist worldview that perceives a woman’s body as harmful.

Unless women are covered up, men will be compelled to fornicate and rape them. Islamic cleric Sheik Taj Aldin as-Hilali puts it like this:

“If you take out uncovered meat and place it outside… without cover, and the cats come to eat it… whose fault is it, the cats’ or the uncovered meat’s? The uncovered meat is the problem. If she was in her room, in her home, in her hijab, no problem would have occurred.”

The “immodest” woman is also an “unwrapped lollipop” irresistible to flies; an “unwrapped sweet” covered in dirt, an evil temptress and so on – a rationale based on dehumanising rape apologia and victim blaming. 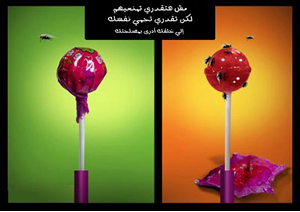 The lollypop on the left represents a veiled woman; the lollipop on the right a woman without veil. Flies represent men. The copy translates as: ” You can’t stop them.  But you can protect yourself. Your creator has your best interest at heart.” 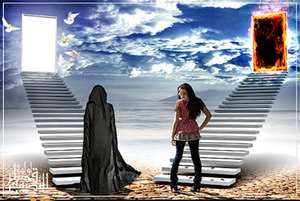 This type of meme is also popular on the social media: Pure veiled women go to heaven, while immoral temptresses go to hell.

“Many people use blackmail to convince women to wear hijab or niqab: you won’t be a good Muslim, you’ll go to hell, you’re pleasing God, you’ll be subject to harassment and molestation if you go outside without a veil. By playing on women’s vulnerabilities, by bringing up the imagery of women being sexually violated or bringing shame upon their families by walking around unveiled, by implying a woman’s morality is linked to how she dresses, women are coerced into believing they are making a free choice in the thousands and millions, every day of their lives.”

Assuming that males are sex-obsessed beasts, with no control over their animalistic instincts, is also demeaning to men, and arguably leads to a rape culture in which women are blamed for their own violation and sexual abuse. Men are afforded no agency or responsibility. “We’re all rape accomplices”, as Kunwar Khuldune Shahid bluntly puts it in this brilliant piece.

The face veil should be opposed because it is an inherently sexist and misogynist concept at odds with all precepts of an egalitarian society. The ability to critically address certain aspects of Islamic culture that are sexist does not, however, imply a blanket rejection of Islam or Muslims.

There is no explicit scriptural justification for face covering in the Quran, however Salafis, an ultra-puritanical movement, demand it.

Backed by Arabian petrodollars, the Salafi movement has gained significant influence in mosques, schools, Muslim organisations and communities. This has led to increased pressure on girls and women to cede to regressive patriarchy – from vigilante “Muslim Patrols” enforcing dress codes on the streets of London, to gender segregated events at our universities, and a school in Tower Hamlets forcing girls young as 11 year old to wear the face veil.

The goal of religious zealots is to carve out increasingly larger areas of public space where they set their own rules.

Some women wear religious clothing not as an expression of piety, but as political statement against ‘Western Imperialism’. Spurred by Islamist organisations, their intention is to deliberately provoke a culture war.

A blanket ban on the face veil would be wrong – based on a liberal principle that adults can make lifestyle choices that are self-restrictive and that state should interfere as little as possible.

However limited, context based bans are right and justified, based on the following egalitarian principles:

– the state must assert gender equality within its institutions

– religious freedom is not absolute, other concerns such as security or identification must be taken into consideration

– the state must protect those coerced

Civil right activists, concerned about oppressive notion of ‘telling Muslim women what to wear’, should first look to an army of proselytisers, preachers and self-serving community leaders who do exactly that: telling us what we must and what we must not wear down to the tiniest detail.

53 Responses to “The progressive case against the face veil”